I was talking to Chad over at The Horror Movie BBQ the other day and he asked me what my favorite PROM NIGHT movie was.  And it suddenly occurred to me that I haven't seen any of the PROM NIGHT sequels in at least eight years.  That needed to change.  Mostly so I could give him a proper answer.  But also for my own well-being, because I was struggling to remember the bulk of the sequels.

We start this journey of revisiting with... 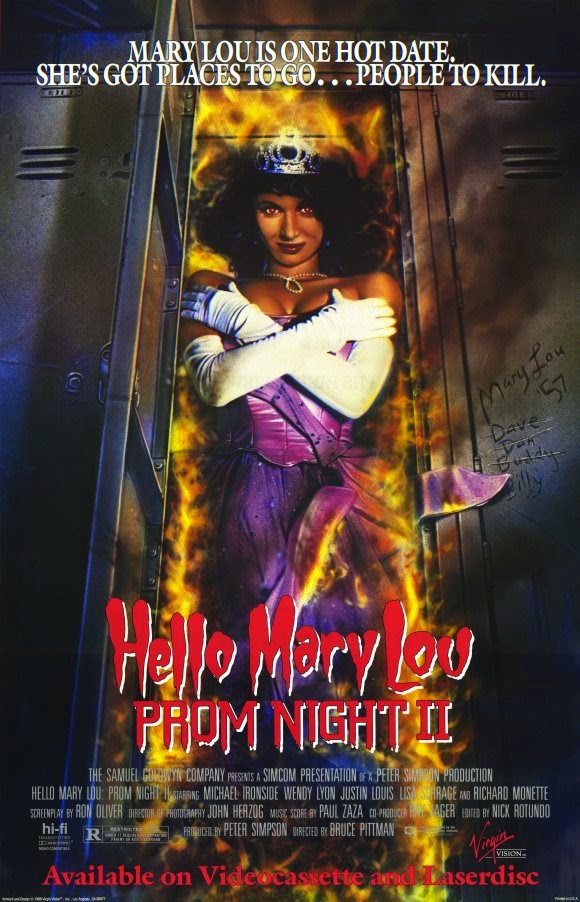 Oh, yes.  Mary Lou Maloney (played by Lisa Schrage).  The scandalous 1957 prom queen at Hamilton High -- that is, until she's burned to death from a prank gone horribly wrong -- all whilst being crowned.


Mary Lou goes up in flames and perishes. 30 years later, Vicki Carpenter, a prom queen candidate roams around the basement of Hamilton High and opens a trunk with Mary Lou's sash and crown. In opening this sacred trunk, she unleashes the curse of Mary Lou. Many tragedies then hit the school and Vicki gets possessed by Mary Lou's spirit

That's the film in a nutshell, save for some minor subplots sprinkled throughout.  PROM NIGHT II is almost a complete departure from the first film, except for the name of the high school, Hamilton High.  It also takes a step back from the teen slasher sub-genre that the original was blanketed with.  Instead, we're given more of a ghost story here.  The haunting of Mary Lou Maloney.  Well, maybe "curse" is a better word.

PROM NIGHT II is a fun movie that dares you not to be entertained.  It's impossible.  Is it good?  No.  Am I okay with that?  Oh, hell yes!  The title alone let's you know you're in for quite a ride.  To me, Mary Lou is more like an anti-hero than a villain.  She's the bad girl for all the best reasons.  The PROM NIGHT series is headed in a very interesting direction. 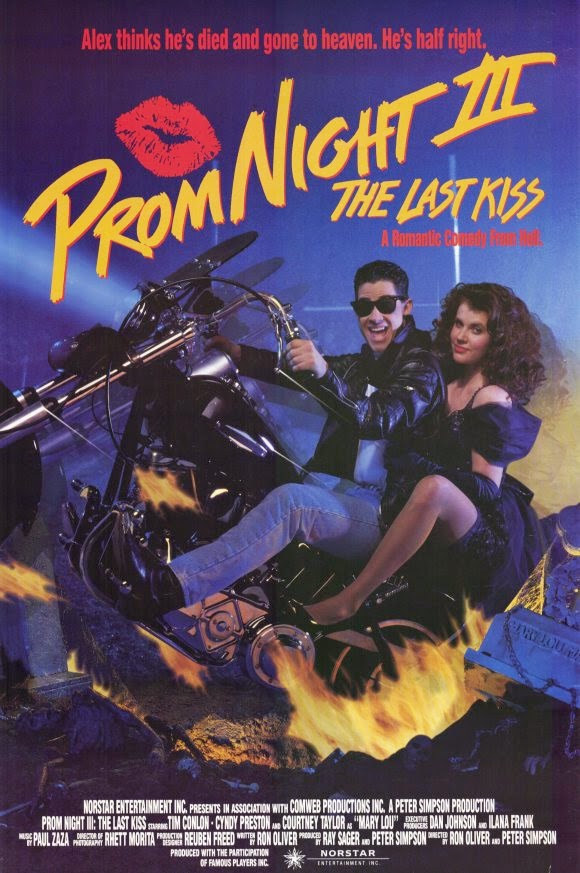 The franchise finally ended up in the direct-to-video bandwagon in 1990 with PROM NIGHT III.  Nowadays, something going straight-to-video, or video-on-demand or anything like that isn't necessarily a bad thing.  But back in the late '80s and '90s, it was a death wish.

This time around, the spirit of Mary Lou Maloney (this time played by Courtney Taylor) is running free through the halls of Hamilton High in a continuation of the story that began in PROM NIGHT II.  The movie begins with the dedication ceremony for the new gymnasium.  And Mary Lou makes her presence known right away -- as the principal is cutting the ribbon, he accidentally cuts off his finger.  Sounds morbid, but the scene plays out pretty comedically.

THE LAST KISS centers around Alex, a senior who, by all accounts, is nothing more than average.  That is, until one night after sneaking back into school to grab some books, he's seduced by the one and only Mary Lou.  Well, the ghost of Mary Lou, that is.

After Alex's late-night rendezvous with Mary Lou (hey, that rhymed!), he finds himself getting mysterious help with his school work and activities.  He soon realizes that Mary Lou is behind his good fortunes.  But Alex decides to live dangerously, balancing his new-found love with his current girlfriend, Sarah.  And he soon finds himself in much deeper than he planned.

Things culminate when Alex much choose to break free from the grasps of Mary Lou and then escape her evil wrath.

That being said, PROM NIGHT III is arguably my favorite of the three sequels.  Hell, I might even like it more than the first movie.  My love for the film actually comes from a dream I had when I was a sophomore in high school.  In the dream, I found a secret section of the school that was long-abandoned.  And this movie just brought the memory of that dream back to the surface. 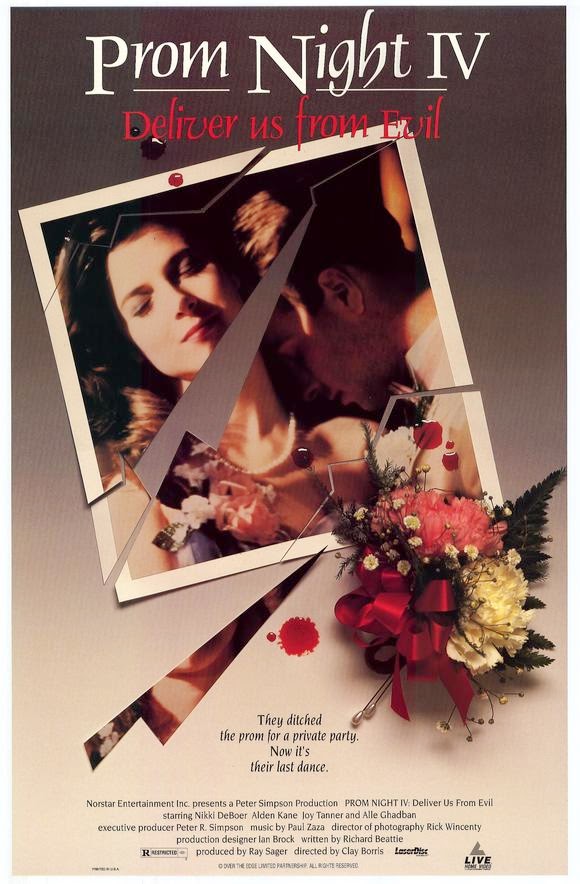 You know how parts two and three took a complete departure from part one?  Well, PROM NIGHT IV takes yet another departure from the established storyline.  However, DELIVER US FROM EVIL opens on the same night that THE LAST KISS starts at, on the night of the prom in 1957.  So there's that connection.

So the movie picks up on prom night in '57, with a couple making out in the backseat of a car in the parking lot of Hamilton High.  Right as things are heating up, their night is cut short as they're slaughtered by -- get this -- a priest.

Father Jonas, to name the antagonist.  He goes on a killing spree to rid the high school of sinners.  That is until he's by his own church and locked in a dungeon-like basement of the church.

A group of high school students decide to skip prom and party instead.  Unfortunately for them, they choose Father Jonas' hideout to party in.  And, well, things get bloody.

Yada, yada, yada.  PROM NIGHT IV is super boring, save for a few kills.  If you're planning a PROM NIGHT marathon at any time in the remainder of you life, you can probably skip this one and just throw in the 2008 remake instead.

The PROM NIGHT series plays a lot like the SILENT NIGHT, DEADLY NIGHT series.  Many similarities can be drawn between the two franchises. 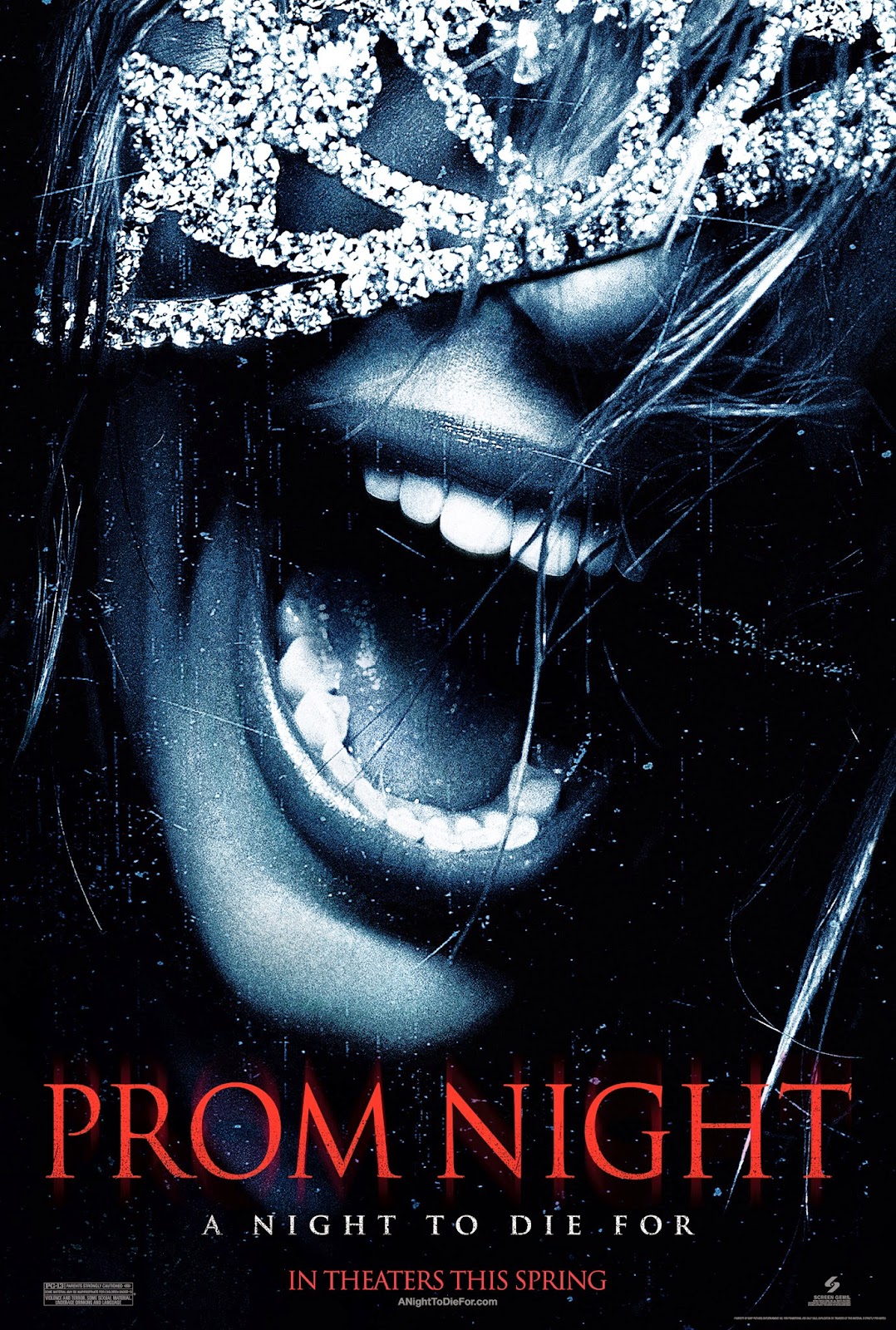 The remake that no one really liked.  The end.  And Brittany Snow was a mega-bitch at the premiere.

So now I ask you: which is your favorite PROM NIGHT sequel and why?  Sound off in the comments below.  Or don't be afraid to engage in a lengthy 140 characters per-post debate on Twitter!