Last night's STALKER upped the ante a little bit by Hollywood on us.  A scenario that's been done to death, but "Fanatic" managed to make it their own in pure Kevin Williamson fashion -- and it totally worked.  Think FRIDAY THE 13TH meets SCREAM 3 meets STALKER.

Stalker -- S01E07 -- "Fanatic"
Once again, the episode starts off with a cold opening.  This time, we find actress Nina, played by the gorgeous AnnaLynne McCord, being stalked by a man wearing a burn/trauma mask in her home.  There isn't an opening kill -- in fact, the intruder actually prepares dinner for Nina and litters her room with rose petals.  Why are you afraid of this guy? 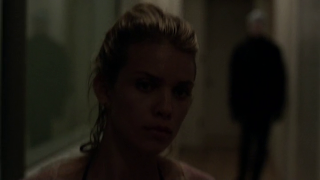 Alas, the intruder leaves without an incident.  Well, after Nina locks herself in a panic room and sets off the alarm, that is.  Naturally, the TAU is called to the scene to investigate because the actress has had a history of stalkers.

Meanwhile, we really don't get a look into the subplot of Jack in this episode.  But we do dive a little further into that of Beth Davis.  Her stalker is getting closer and closer.  Even entering her apartment this time around.  And sending her newspaper clippings of her tragic past.  He knows everything know.

Back to Hollywood, Nina's stalker ends up being an obsessed fan who is acting out fantasies based on her hit TV show "Savage Shore".  The perp believes he has an actual relationship with Nina, like most, but his story is a little different.

Turns out, he emailed Nina one time in the past confessing his love for her and got many responses back from her...or so he thought.

Yadda, yadda, yadda, the perp is apprehended, tells the cops about his and Nina's "relationship" and that's that.  Right?  Wrong.  Turns out someone was sending emails back to him -- his mother!

To humor her son, she sent him emails as Nina, playing into his fantasy, unbeknownst to him.  She just had no idea how far he'd go to fulfill them.  This is FRIDAY THE 13TH aspect of the episode.  His mother know seeks revenge on Nina and goes after her at the studio (and there's the SCREAM 3 nod).

All in all a great episode.  And the Gary Jules cover of "I Want You to Want Me" is nothing short of fantastic.  The original title for this episode was supposed to be "Smothered", which would have been just as good.  But "Fanatic" fits just fine. 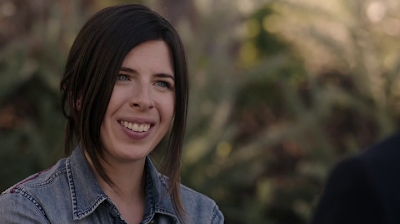