Last night's STALKER, titled "Skin", dealt with an ex-Neo-Nazi is stalked by what would appear to be current Neo-Nazis.  Or is he?  It was an interesting episode, to say the least.

Stalker -- S01E08 -- "Skin"
"Skin" broke away from the standard stalk-and-slash cold opening that has become a staple in STALKER thus far.  The episode begins with a family in their home when there's a disturbance in the front.  The father rushes outside to see a fire in his front yard and word "NAZI" plastered across the front of his house. 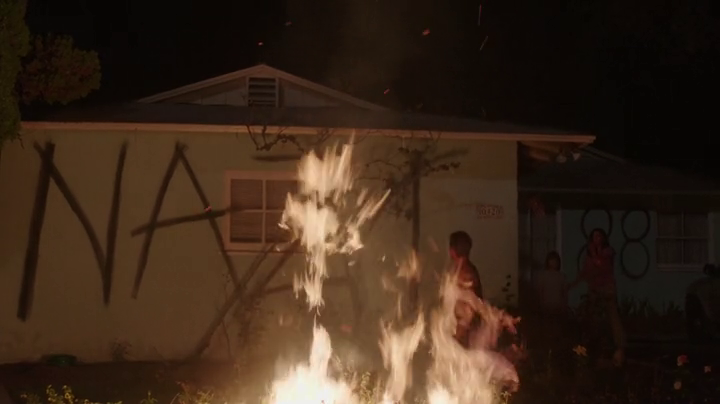 Oh, yeah, and father's torso is covered in ant-Semitic tattoos.

See, the dad is an ex-Neo-Nazi.  And he fears that he is being targeted by current, active, Neo-Nazis.  So the Threat Assessment Unit is brought in to handle things.

Like I said, the case in interesting, but I felt it really didn't need to be an episode of STALKER.  It just didn't quite fit the template, I suppose.

Now for the subplots of Beth and Jack.  We don't get much of Jack's, but we do learn that his son's mother is becoming a little more lenient with Jack, with the help of her current boyfriend (Jack basically saved his life in this episode).  And as for Beth, the episode concludes with Beth getting home to find a package on her doorstep.  She picks it up, heads inside and does her normal routine of locking everything and setting alarms.  When she finally gets around to opening the box, she sees that someone has sent her a teddy bear with a yellow ribbon around its neck.

She's startled.  She retrieves a box from her closet and removes a similar bear with an identical yellow ribbon around its neck.

Beth realizes that her stalker has more-than-intimate knowledge about her and her past.  End episode.

Side note: another hella-cool cover song at the end -- "Hungry Like the Wolf".