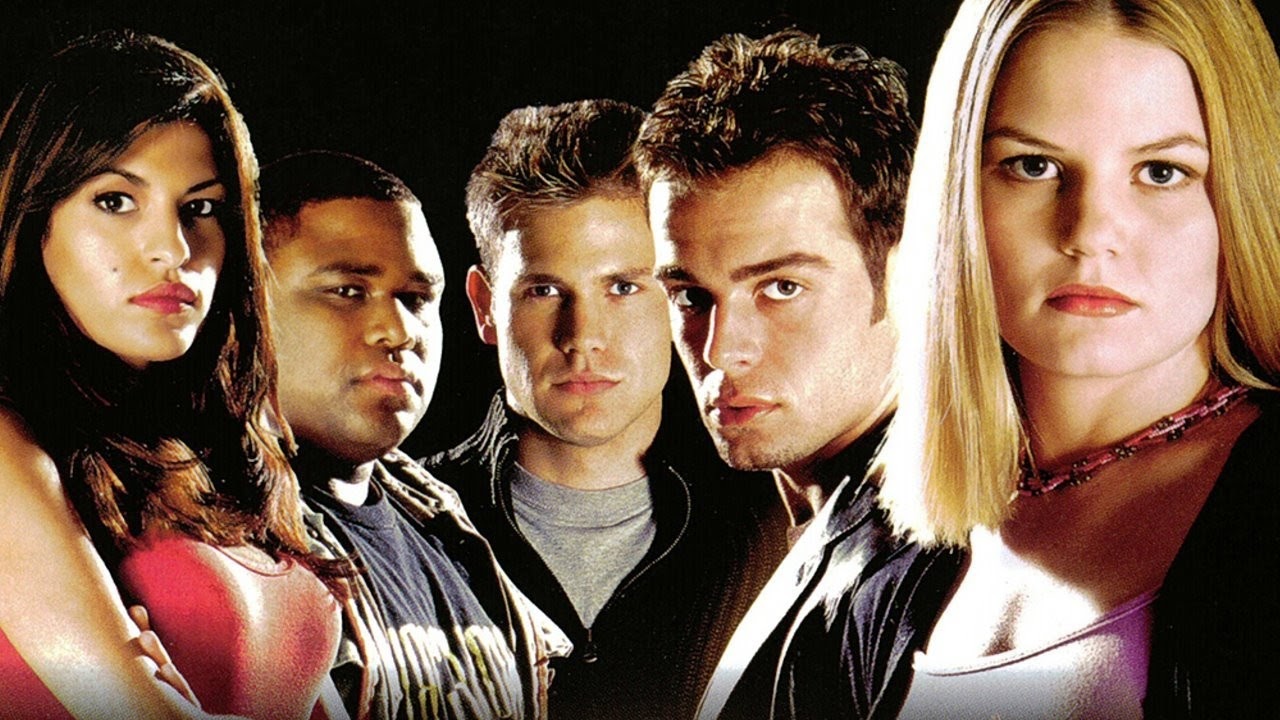 So I've decided to continue my adventures in the URBAN LEGEND franchise with the top ten reasons to love URBAN LEGENDS: FINAL CUT, the sequel from 2000.  Now the original URBAN LEGEND established some pretty solid ground work for a slasher series -- unfortunately, director John Ottman decided to take the sequel in a different direction, with new characters and a new story.  Well, I take that back.  The security guard Reese (Loretta Devine), from the original, connects these two installments.

But we can't sugar-coat this, FINAL CUT gets a lot of heat.  And rightfully so, for the most part.  But within the walls of many cinematic turds, a silver lining can be sought out.  So hopefully I've done the film justice with my reasons below.


Just when you're starting to believe that URBAN LEGENDS: FINAL CUT has absolutely nothing to do with the original film, in comes Loretta Devine!  You may remember her as the sassy, foul-mouthed security guard from URBAN LEGEND.  Well here's our connection!  As Amy is walking to the library at night (in the middle of a freak snow storm, mind you), Reese pulls up and offers her a lift.

Amy tells Reese about how she's struggling to come with an idea for her thesis film.  And that's when Reese tells her about the incident at Pendleton University.  Amy's heard the story and brushes it off as just an urban legend.  However, Amy decides to use the whole "killer using urban legends as an M.O." shtick as her basis for her film.  The two also discuss Pam Greer, which they both have a mutual admiration for.


2. Finally, the "Kidney Heist" is carried through!


Though the whole "Lover's Lane" urban legend is considered the most popular of all the U.L.s, the "Kidney Heist" is a close second.  If you recall, Brenda attempted a half-assed version of the "Kidney Heist" on Natalie in the final act of URBAN LEGEND, but she was unsuccessful and no kidneys were harmed.  But that's not the case this time around.

The first film used up a large majority of the more sinister U.L.s, so FINAL CUT had to get a little more creative and dig deeper into the folklore of years past.  But not with this one.  The scene begins with Travis and one his actresses sharing a few drinks in a bar.  As their next round is being prepared, a mysterious hand reaches out and laces the drinks with a sedative.  Travis decides he's had enough and leaves while the actress shoots her's down and heads for the coat closet.

Whilst in the closet, the sedative begins kicking in and she becomes hazy -- and a masked figure jumps from the coats at her just as she passes out.  Cut to hours later.  The girl comes to.  She's in a bathtub full of ice.  She notices a large wound on her lower side.  She sees an organ lying on a table off to the side.  And down the hall she spots the masked assailant washing the surgical utensils in a sink.

This is clearly the most effective kill scene in the entire movie.


3. There's a great homage to the original film's killer!


A little over twenty-one minutes in to the movie, there's a scene where Amy is peeping through a winding watching Travis mix the sound on his movie.  And while she's busy watching, we get a glimpse of a figure in a parka walking up on Amy.  This is cool because it's an obvious nod to the wardrobe the killer from the first movie wore.

As a hand reaches out and startles Amy, she spins around to see two people standing there in parkas and Halloween masks (see above photo).  False alarm,  It's just two of the FX guys clowning around.  Still, this was definitely one of those "oh, that's cool" moments in the film, especially considering that it isn't a rare occurrence for a horror sequel to either completely disregard the original or make no mention of it whatsoever.  So at least we've now got two great nods to the original.


One thing a lot of teen movies, horror and comedy, from the early 2000s have in common is Jessica Cauffiel.  She's that spunky blonde with attitude.  You might remember her from ROAD TRIP, where she played The Wrong Tiffany -- and we witnessed her mercilessly beat up her "cheating" boyfriend.  She also starred in both LEGALLY BLONDE movies.  And a year after FINAL CUT, she starred in VALENTINE for director Jamie Blanks, another slasher along the same lines of URBAN LEGEND (also directed by Blanks).

But much like she did in VALENTINE, Jessica manages to steal the show.  In almost every scene she's in, your eyes are drawn to her and away from the lead(s).  She's a captivating woman, even in her death scenes.  The world needs more Jessica Cauffiel in movies.  Especially horror movies.


5. The killer films a murder!


Okay, now I admit this isn't one of the best reasons to love this movie, but it was among the first modern slashers to incorporate the killer filming a murder and then playing it to the central cast.  In fact, the only time I remember anything close to this was in 1997, towards the end of SCREAM 2 (Gale and Dewey are watching news tapes when the killer's camera interrupts.).

This technique has been used several times in recent years, especially with the found-footage craze.  So kudos to URBAN LEGENDS: FINAL CUT for being a trailblazer.


This is easily one of the biggest cop-outs a movie can make -- when a main character is killed off, yet the actor's work isn't over, because they return as the deceased twin.  Yeah, this happens in FINAL CUT.  Most hilariously pulled off in BEER FEST, though.

Davis starts out the film playing film student Travis.  But when Travis ends up dead of an apparent "suicide", his twin brother Trevor shows up.  Only real difference between the two is that Travis wore his hair down and Trevor wears it up.  Whatever.


Okay, so number seven is a bit of a cop-out.  This isn't really on the level on TERROR TRAIN when it comes to several costumes worn by the killer, but there are a few times in the movie that the killer alters his appearance -- either for a visual gag (pictured above) or to blend in to his surroundings (pictured to the right).  It's almost as if the filmmakers looked at the final design for the killer and thought, "You know what, that fencing mask isn't very scary.  Let's make him funny!"

In the end, the killer's appearance reflects the overall quality of this sequel.


8. The killer has the worst motive ever!


Some slasher murder motives are genius (CHERRY FALLS), some are revenge stricken (FRIDAY THE 13TH, SCREAM, I KNOW WHAT YOU DID LAST SUMMER) and some are just plain realistic (VALENTINE).  And there's URBAN LEGENDS: FINAL CUT.  Get this: the killer's motive for murder is a ticket to Hollywood.  The film professor has been stuck at the university ever since his thesis film didn't win the grand prize years ago.  And now, as a teacher, he notices how great Travis' film was and plans to kill off the entire cast and crew of that film so he can pass it off as his own.

Oh, and the main character Amy, it was her dad who rejected his film years ago.  A motive so bad it'll make you love this movie!


One of the coolest nods to the original film comes just before the end credits.  We catch up with the killer, who is apparently locked up in some mental institution.  The icer is when the nurse bends down and she's revealed to be Brenda!  The killer from the first film!  How cool is that?!

I had always imagined that she's break him out and they'd go on an urban legends killing spree.  Only in my head, right?


The entire film had a bit of a Hitchcockian theme running through it, so it was only natural that director John Ottman opted to use the theme from Alfred Hitchcock Presents during the end titles.  It's quirky, and I'm sure the younger audience didn't "get it" at all, but I loved it.

So there you have it, my top ten reasons to love URBAN LEGENDS: FINAL CUT!  Just so you know, this list was a lot harder to write than the one for URBAN LEGEND.

Agree or disagree?  Let me know!