An interview with Christine Elise McCarthy, 'Kyle' from CHILD'S PLAY 2

I recently had the opportunity to get know CHILD'S PLAY 2 actress Christine Elise McCarthy a little bit.  So what's the "badass teen rebel Kyle" up to nowadays?  Let's find out!

First off, let me start with the typical fanboy swoon and saw what an honor and privilege it is for the opportunity to as you a few questions.

You recently published your debut novel, Bathing & The Single Girl, which was based on a short film of the same name, which you wrote, directed and starred.  Now, has writing been something you've always been passionate about or something relatively new?  Besides screenplays and teleplays, that is.


I have always been interested in writing -- since I was a child.  I have always been a big reader & book collector so authors are the rock stars of my life.  My favorite authors are: Charles Bukowski, John Fante, James Ellroy, Harry Crews, Dashiell Hammett, Raymond Chandler & Brett Halliday.  I tried writing a novel about a decade but it became meandering & cumbersome & I lost interest in it.  Bathing & the Single Girl came out of me, stream of conscience style and the first draft was done in 8 weeks.  It was a very easy process for me.  I ended up rewriting it about 50% of it -- which took another two months but I was much happier with the final result.  My goal was only to write the funniest book ever written & and I am fairly confident I did.  I brag about nothing in my career but I am proudest of this book -- above all else in my past & I boast about it fearlessly.

What was the writing process like on Bathing & The Single Girl?  I'm a writer myself, and I know sometimes the words just flow, but every now and then writer's block can sneak up and bite you.  Anything like that happen with you?


Writer's block happened here & there but never for long.  If I felt blocked -- it usually meant I was headed down a bad story path.  Cutting the parts that blocked me usually solved the problem.

Are there any future writing projects in the works that we can look forward to?


A feature film called The Livingston Gardener was just released & can be streamed online.  I just completed a short film called Parachute Kids -- and the details for that film can be followed here -- https://www.facebook.com/parachutekidsfilm?fref=ts.  And I think I will be in the episode of Hit the Floor that airs this weekend.

As far as acting goes, is there any one genre that you prefer doing over all others, or do you enjoy the process of tackling all types of roles?


I prefer drama.  Smart & gritty drama.  Unfortunately -- so much of that sort of thing suddenly seems to require pretty extreme nudity & I am not comfortable in a bathing suit -- let alone nude -- so a lot of those opportunities are closed to me.

Do you have any regrets as an actor?  Maybe a role you turned down and later kicked yourself for it?


Not really.  I was never in the position to turn down much & certainly never turned down anything good.  I just did not ever reach that level where I had choices.  I just auditioned whenever I got the chance and accepted every job offered.  It is frustrating that so many people think an actor's resume reflects their taste in projects.  More often it reflects simply what they were offered.  Only A-list people get to pick & choose & risk making bad decisions.

I'm going to throw it back for a moment.  You played Kit Keller in the TV series of A LEAGUE OF THEIR OWN -- was that a physically demanding role?  How was that whole experience?


Not demanding at all except that I am NOT a baseball player & am inclined to want to catch & throw -- both with my right hand.  But it is TV & when you fuck up -- you get another take.  So -- not demanding.  It was a lot of fun working with so many great ladies.  And Tom Hanks directed an episode -- which was -- obviously -- very entertaining.

As an actress, I'm sure you get recognized every now and then.  And besides CHILD'S PLAY 2, what role are you most recognized for?  My guess would be as Emily Valentine on BEVERLY HILLS, 90210.


Absolutely Emily Valentine -- but Kyle is the 2nd place one.  I am never recognized for ER, which is odd, because I did more of those & the show had a FAR larger audience.  I guess the character was not as iconic as Emily -- or as polarizing -- so -- that probably explains it.  Oh -- and older people recognize me from In the Heat of the Night.

And speaking of fan interaction, has hopping on the convention circuit ever been anything you'd be interested in?  I can only imagine how long your line at a horror con would be.


I have done 4 or 5 shows & I love doing them but I am not much of a draw at them, it seems, so the producers of those events don't invite me.  You have to be invited to those things & the actors with the largest ticket-selling power get the slots.

Besides acting and staying active in entertainment, how do you keep busy in your spare time?

Now, as far as any future roles are concerned, is money a major factor?  Or do you care more about the quality of the project?  I suppose "both" would be an acceptable answer.  But what say you?


Of course -- both.  I have done a ton of stuff for free or $100 a day but that doesn't pay the bills.  Everyone needs & likes to have money.  I just won't do any role that feels embarrassing.

Your resume is pretty impressive and you've been in a large array of genres, but what types of movies appeal to you most as a moviegoer?  Like to be scared?  Laugh?  Solve a mystery?


Not a horror fan, really.  Again -- I like smart dramas but thrillers & comedies are fun, too.  I like anything that is well done -- though I am not a fan big action films -- at least --  they don't appeal to me strongly.  Still -- there are exceptions to that, too.  I liked the Matt Damon Bourne series & the first Iron Man -- so -- never say never.

You have a pretty active online presence -- is social media something you really dig?


Yes -- because it had democratized media.  It is a great way to share information, opinions & projects so I am all about it.  Plus -- I really enjoy that on Facebook -- the list of people that might like a post of mine might include an ex's mother, the person that cast me in my first job, another ex's wife's grandmother & someone I went to high school with.  It is a great way to keep tabs on pretty much everyone who has ever touched your life -- without the commitment of calls or seeing them in person.  Facebook can be a pain in the ass but -- overall -- I think it is a great tool.

Okay, I'm going to bring up Chucky for a second.  In the latest installment, CURSE OF CHUCKY, there's sort of a bonus scene at the end involving Alex Vincent's Andy there's a nice little nod to you in the form of a picture of Kyle sitting on a table.  Now, were you aware of this beforehand?  Or was it a nice little surprise?


Not a surprise.  I supplied the photo & the actor's union requires you get paid or that sort of thing.  Apparently, some character on Hawaii 5-0 was watching CP2 in the show & Alex & I get little checks in the mail all the time for it.  Any on-screen appearance by any actor -- even just a photo -- is covered by the union.

You've done a lot of TV work -- do you prefer the character development on TV as opposed to trying to flesh out a believable character in 90 minutes?


I just like to work.  The TV thing can be tricky -- if you do one role for a long time -- because writers can make you do anything they want -- even things you do not like -- where, with a film, you know everything you are agreeing to do up front.  But -- I just like to work & longer jobs pay more.  lol

Don Mancini calls you and says, "Christine, I got a role for you.  You in?"  Your answer would be...?

Is there anything CHILD'S PLAY 2 related that you'd like to share that maybe hasn't been brought up?

Once again, a huge thank you for your time!

Let's hear it for Christine Elise McCarthy!  She's an absolute pleasure and I look forward to seeing and hearing from her a lot more! 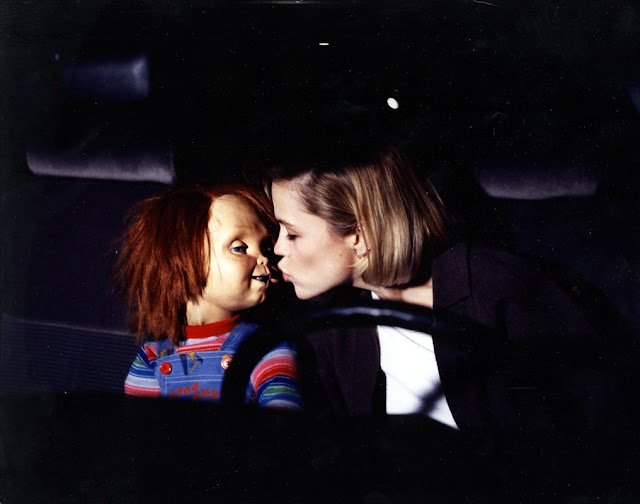