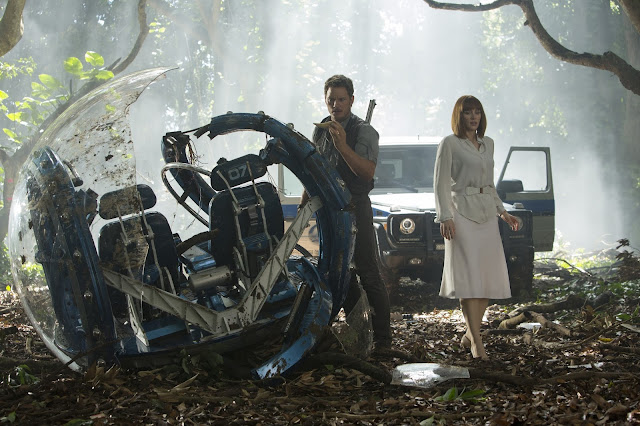 Set approximately twenty-two years after the events of JURASSIC PARK in 1993, JURASSIC WORLD takes a look at the park in full swing and open for business in 2015.

The movie kicks off with a scene of two genetically modified hybrid dinosaurs being hatched, one of which stares at the other with a sinister glare -- a little foreshadowing, if you will.  The hybrids are the now-infamous Indominous Rex, or D-Rex as they're referred to.  We learn early on that they're part T-Rex, which should be pretty apparent by the name, but we're never told what they're spliced with until the climax when Chris Pratt's Owen Grady puts the pieces together.

The basic story revolves around the escape of the D-Rex and trying to stop it before it reaches the main park.  Easier said that done.  The D-Rex is equipped with a few terrifying defense mechanisms, such as lowering its core body temperature, making it undetectable via thermal imaging and camouflaging itself in its surroundings.

Brothers Zach and Gray are sent to Jurassic World by their mother, Karen (played by Judy Greer), to spend some time with their aunt, Claire (played marvelously by Bryce Dallas Howard), who just so happens to be the head-honcho of the theme park.

Once the boys arrive, they really don't get to spend a whole lot of time with Claire because she's busy running the park, so they're shoved off on her assistant instead.  Zach and Gray eventually shake the assistant and go roam the park by themselves -- which they seem to have a lot more fun doing.

The boys are out on a gyrosphere ride when the announcement is made that that all attractions are now closed and to return to the to where they started.  Obviously, the boy's disregard this announcement and head into a restricted area.  Now this is honestly where things get really cool and nostalgic.  They come up to a big set of doors emblazened with faux dinosaur fossils and a large, weathered, Jurassic Park logo hanging above.  That's right, Park, not World!

The two enter the long-abandoned building and we're instantly transported to the finale of the 1993 film.  It's the visitor center (main building) of the original Jurassic Park!  And the large banner that reads "When Dinosaurs Walked The Earth" is still lying on the ground in a pile of T-Rex bones.

From there, the boys escape and finally meet back up with their aunt and Owen.  Owen, by the way, might just have the coolest and most dangerous job ever.  He's the alpha in a pack of Velociraptors.

This all leads to an epic showdown of prehistoric proportions. 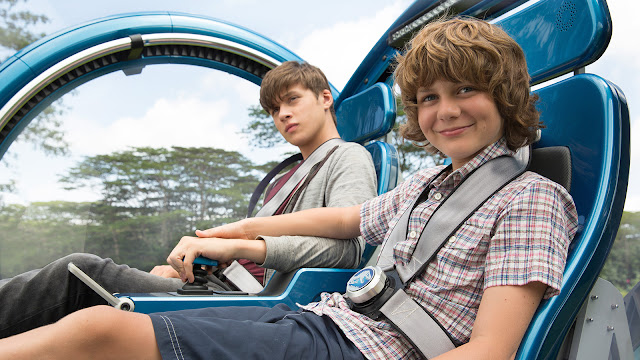 JURASSIC WORLD is one of those rarities that lives up the original.  And in the day and age of sequels, prequels and remakes, WORLD proves that there is still room for the mighty sequel.  Though lacking the same heart as the original, director Colin Trevorrow has crafted a damn good dino flick chock full of winks and nods to the original film -- a love letter, of sorts.

The only real gripe I had with the movie is that the relationship that we end up caring most about is the one between Owen and his raptors -- when, in reality, we should care the most about the bond between the two brothers and their aunt finally realizing that the dinosaurs are living animals and not just assets.

But at the end of the day, JURASSIC WORLD is the most fun I've had at the movies in a long, long time.  A clear disregard for THE LOST WORLD: JURASSIC PARK and JURASSIC PARK III ended up not being such a bad thing after all.