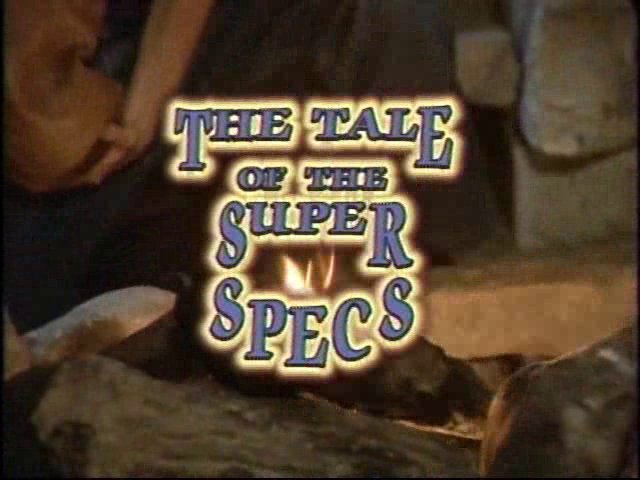 This episode opens with Gary at work at his father's magic shop and Kristen is there telling him how some of the gang aren't finding his stories all too scary anymore.  Gary informs her that he gets most of his story ideas from right there in the shop.  Kristen grabs a funky pair of glasses and Gary tells her they are "super specs" -- he then proceeds to put them on, saying they have X-Ray vision, and eyes Kristen up and down.

What's best about this episode's opening is that it is the first episode in the series to feature the now-famous opening title sequence!

This tale begins in a magic shop, with April Fool's Day approaching.  But not only is it a magic shop, but it also doubles as a pretty neat little Halloween store! 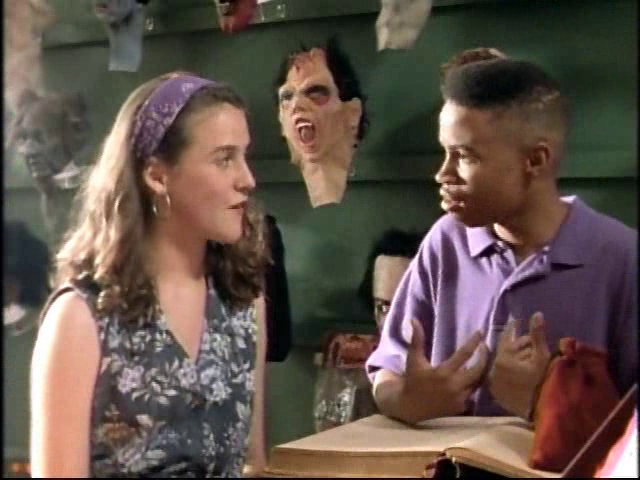 A kid named Weeds and his girlfriend Marybeth are browsing the shop and Weeds is looking for a spell.  He's fooling around when he accidentally sprinkles some "magic dust" on a set of seemingly normal sunglasses, transforming them into "super specs."

We're eventually introduced to the shop owner, Sardo (accent over the 'do). 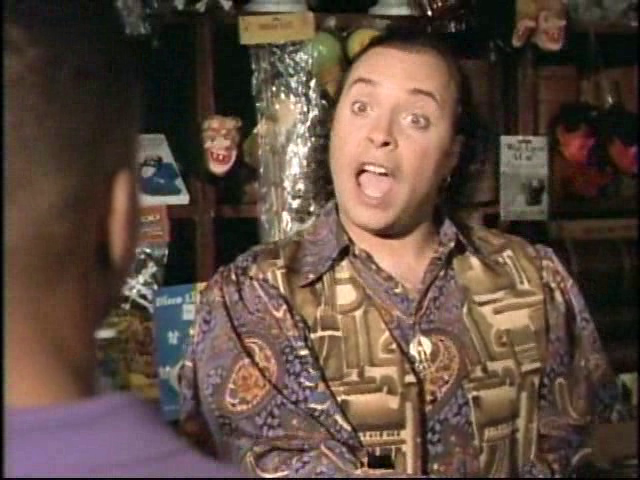 Sardo sells Weeds a pair of the super specs, telling him they have X-Ray vision.

Marybeth puts on the glasses and scans the shop until she sees an eerie figure standing in the window... 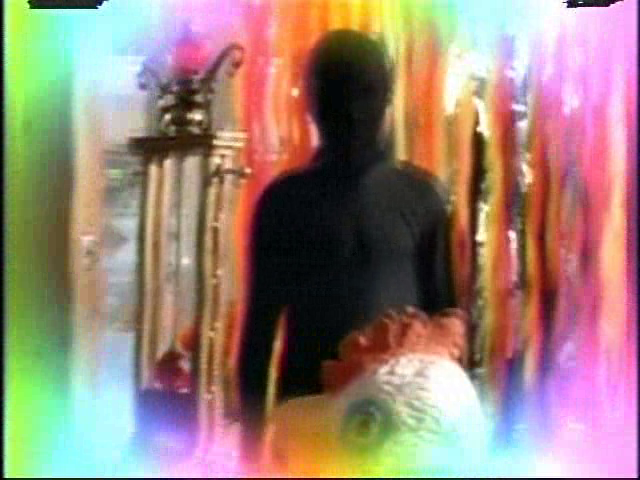 ...and when she removes the glasses, the figure is gone.

Later, at  school during lunch, Weeds plays a prank on a couple girls that gets a small laugh -- he sprinkles some of that magic dust into on of their yogurt packs and the girl's voice gets really high-pitched. 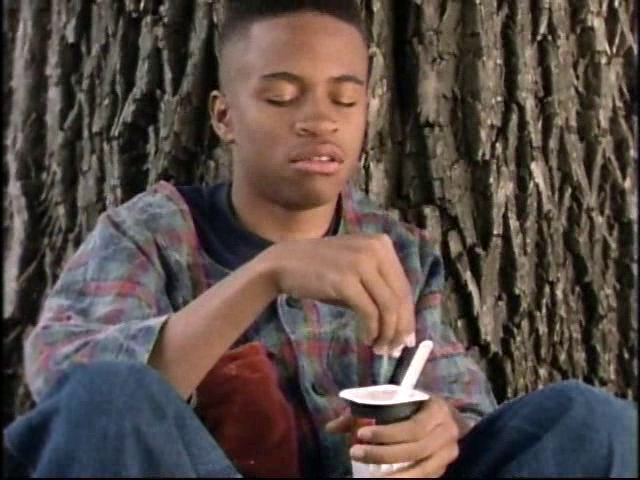 Oh, and this is her "high-pitched-voice face"... 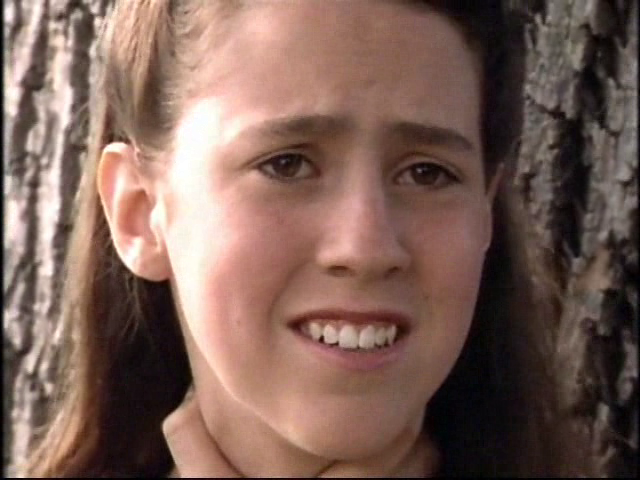 Weeds plays a few more miscellaneous pranks on other students, and one of them asks about the glasses he's wearing.  Marybeth walks up and takes the glasses and puts them on again.  And again, she sees something pretty disturbing... 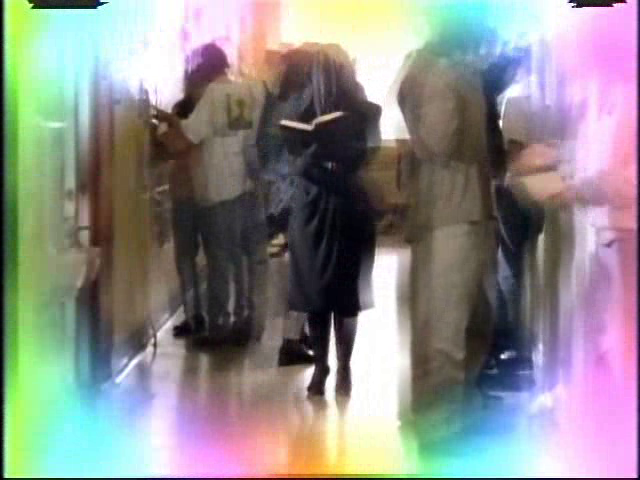 ...so you'd think she'd learn by now now to put on the glasses --  all she sees is creepy shit.

Again, she starts spouting how she's seeing things.  And again, no one believes her.  She even tries to tell Weeds again and have him put on the glasses and look for himself.

Alas, Marybeth tries to throw the glasses away but they end up right back in her purse.  So she goes back to Sardo's and slides them into the mail slot.

And when Marybeth returns home...well, you guessed it -- the glasses are back in her bag.  She just can't get rid of the damn things.

Like a fool, she puts on the glasses again.  Only now she's seeing weird things...like a boiling tea pot when in reality there isn't one. 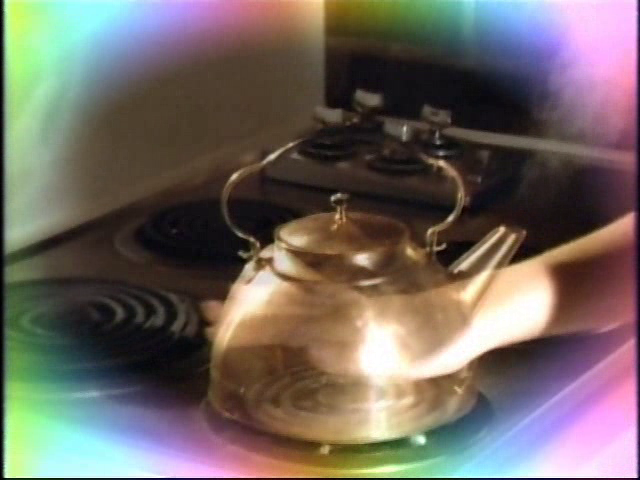 So she walks around her house seeing all sorts of unusual things.  She eventually runs into the mysterious dark figures again. 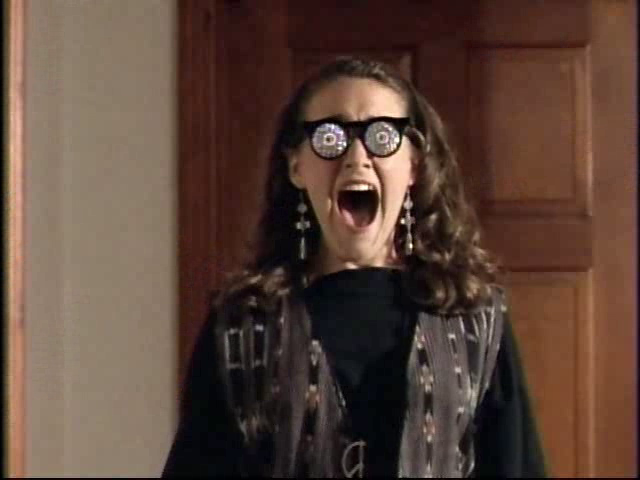 The figures approach her.  She bolts for the door.

She goes and finds Weeds and his buddy at the basketball courts.  Once there, she puts the glasses on again and sees a bunch of dark figures playing basketball.  She screams and runs again.

So she goes to see Sardo again.  He tells her that it's the "spell of second sight."  Another dimension, if you will.

Sardo tells her that she'll need some magic dust and she gets to Weeds just before he flushes it. 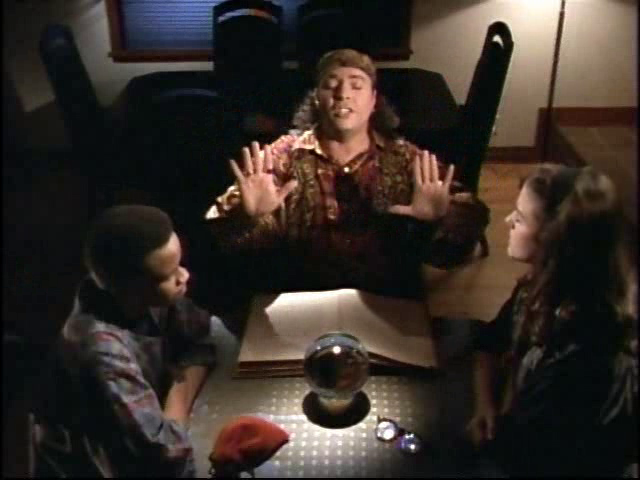 So Sardo, Weeds and Marybeth gather 'round to try and break the spell. 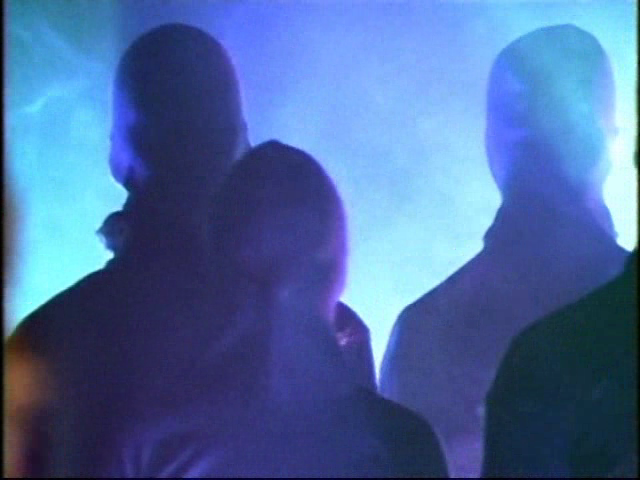 And behold, now they can all see the beings, even without the specs.

Sardo attempts a spell called the "cosmic seal."  And it works.  Everything returns to normal.

Or so they thought.

A giant talking head tells them that two universes cannot exist on the same plane.  And suddenly they're thrust back into the real world.  Or so they thought again.  They ended being trapped in the non-dimension.  A weird ending.

But, poor Gary -- this story wasn't that scary.  But the Midnight Society ate it up.

Next episode: S01E07 -- "The Tale of the Captured Souls"
Are You Afraid of the Dark? Midnight Society Nickelodeon Snick TV