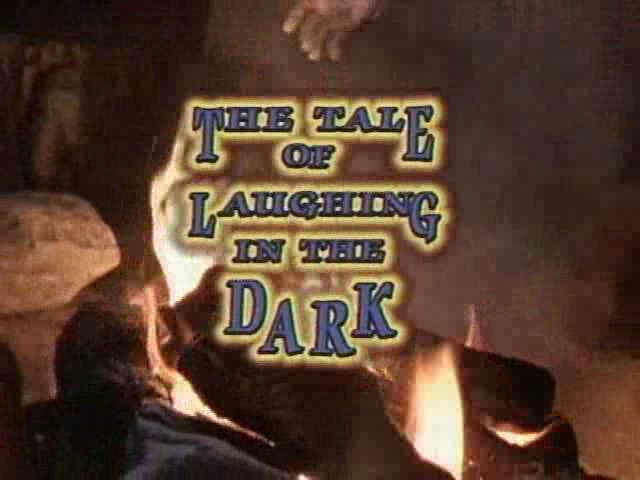 This next entry in the Midnight Society is one of my personal favorites.  A story about the fear and the unknown of carnival and fair fun houses.  Intriguing on the outside -- but what horrors that may await inside is the real treat.

The episode kicks off with the tale already in progress, but it's quickly disrupted by the members of the Midnight Society.  It appears that Rachel Blanchard's Kristen is terrified of clowns and begins to leave the campfire when she's called out by the other members.  Attempting to prove the naysayers wrong, Kristen decides to stay to hear the rest of the story.

And good for her.  Because this one is a treat. 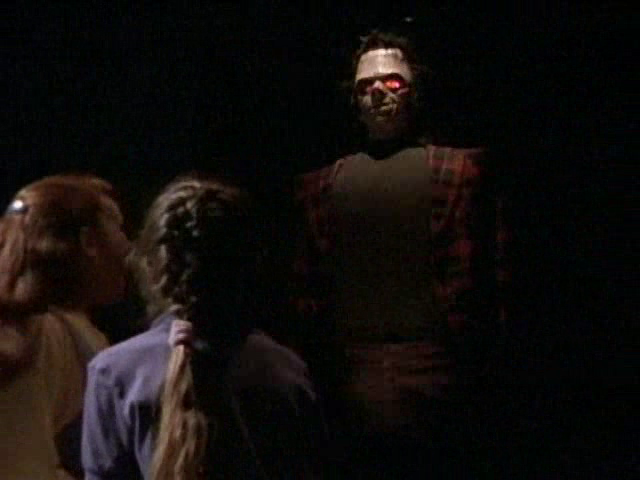 The tale begins at a town's local carnival, Play Land, home to a haunting funhouse called Laughing in the Dark that has the kids of the town screaming in fear -- whether it be a robotic Frankenstein with glowing eyes or a cackling severed head.

But, of course, the main villain of this episode was Zeebo the Clown, the funhouse's main attraction! 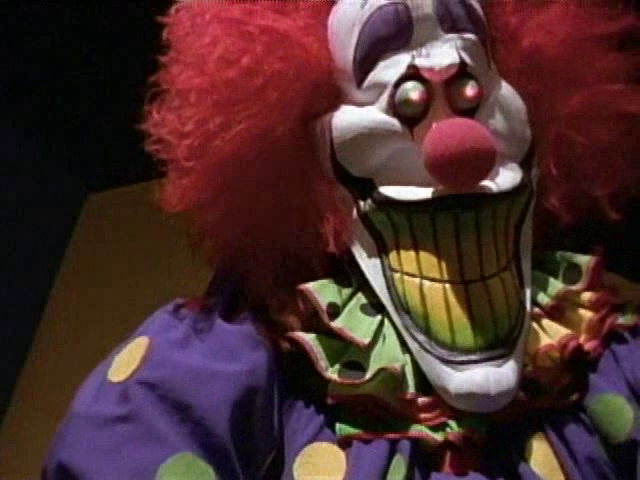 In Play Land, Josh and Weegee are walking through the park with Weegee's younger sister, Kathy.  They finally stumble upon the the Laughing in the Dark funhouse.  Boys being boys, they dare each other to enter the funhouse after rumors of the funhouse actually being haunted by the spirit of Zeebo the Clown, the haunts main attraction.

After a strange encounter with the man who runs Laughing in the Dark, they both chicken out.

The next day they're hanging out in Weegee's room with print-outs of the history of the Laughing in the Dark funhouse -- and more insight on the legend of Zeebo the Clown.

They learn that many years ago, Zeebo stole some money from the Play Land pay roll and hid out in the Laughing in the Dark funhouse.  The place burnt to the ground with Zeebo inside after he casually tossed one of his lit cigars aside.  A new funhouse was erected in its place and a mechanical prop of Zeebo was put at the exit of the funhouse to scare customers.

Weegee finally dares Josh to go through Laughing in the Dark.  Not only does Josh agree, but says he'll steal Zeebo's nose as proof -- and Weegee will have to wear the nose to school.  Sounds innocent enough, right? 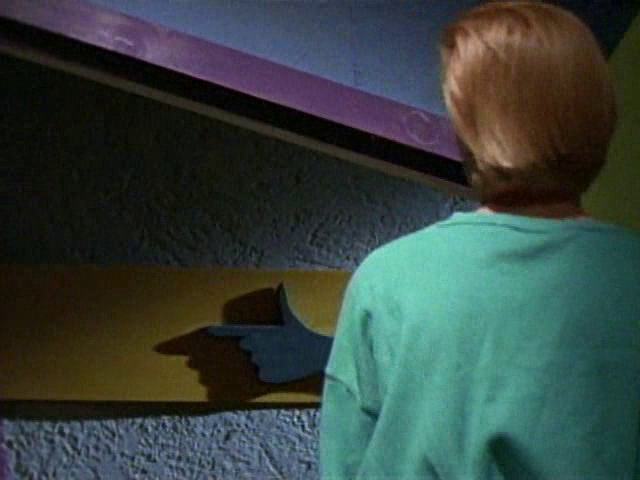 Of course, Josh picks the right door to leave at the end.  But he doesn't have the proof he needs.  So he opens another door. 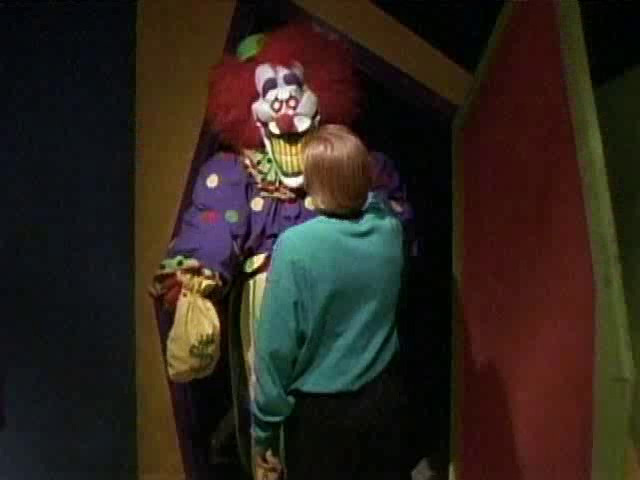 And staying true to the bet, he snatches Zeebo's nose. 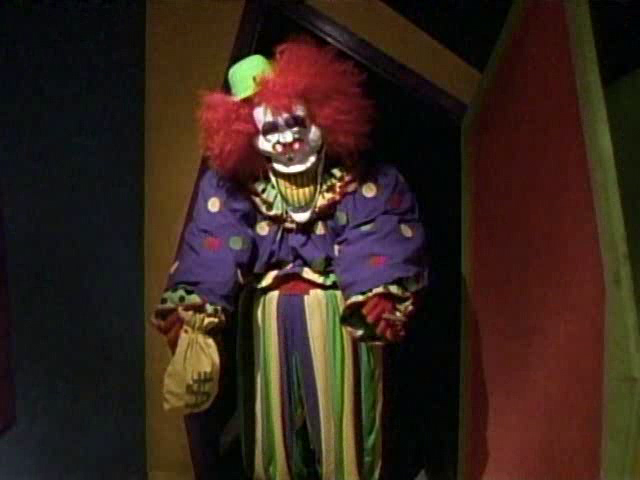 Of course Josh has to patronize the clown a few times before he finally exits.  Because that's never had any consequences in a scary tale before.

So Josh has stolen Zeebo's nose and Weegee has to wear it. 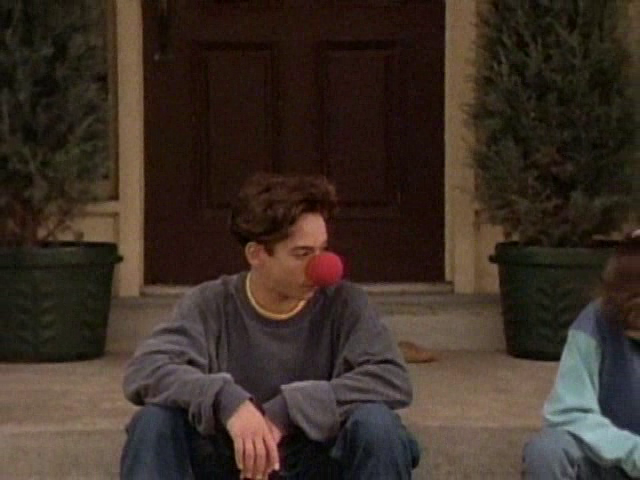 Weegee concedes to being a loser and Josh being a hero, but he's not happy about it.  But not all is what it seems.  After Weegee and Kathy go back inside, Josh smells cigar smoke.  She shakes it off and heads away.  And we're left with this... 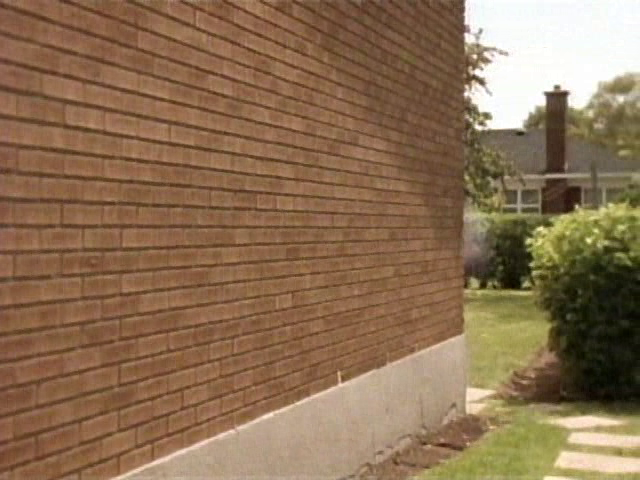 ...a strange puff of smoke coming from behind the house.  Totally unbeknownst to Josh or the others, but we see it.  And we know it's Zeebo smoking a cigar.

Josh goes home to en empty house, finding out that his parents had tickets to the theater, so he's home alone.  They leave him a note reminding him that there's spaghetti in the freezer and chocolate pudding in the fridge.  Like any kid, he smiles about the pudding part.  Side note: Now I want pudding! 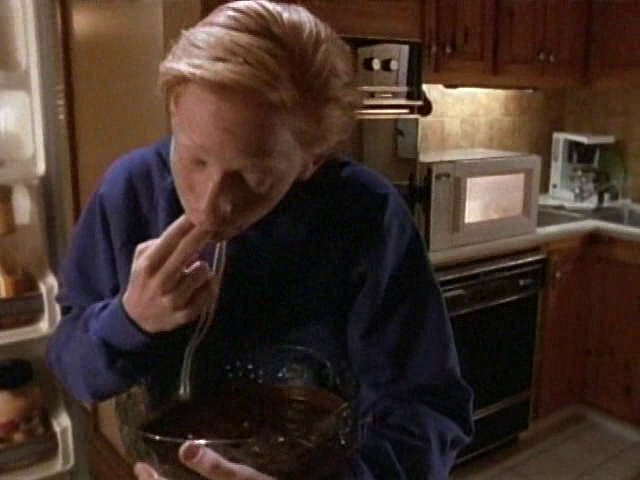 So, naturally, while the spaghetti is heating up in the microwave, he helps himself to some of the chocolate pudding.  But a sound comes from behind him and he drops the bowl, spilling the pudding everywhere.  What a bummer.

The closet door in the foyer creaks open.  Josh retrieves a baseball bat from the hall closet.  But it turns out to be nothing.

The phone rings.  It's Weegee.  He's calling to apologize for being a sore loser.  Josh gives him some shit about it and demands that he still has to wear the nose to school.  They hang up.

The phone rings again.  Josh answers, only this time, instead of it being Weegee, a scratchy voice comes though, "Give it back!  Give me back my nose!"

Josh tries to play it off, hoping it might be Weegee messing with him and abruptly hangs up the phone.

The microwave goes off, indicating that his spaghetti is done.  He pulls the bowl from the microwave but a weird smoke and smell is coming from inside.  "Cigar smoke?  How is that possible?" he asks himself.

He removes the lid to reveal a bowl full of smoking cigars, not his mom's spaghetti.  He drops the bowl and we're treated to this little mess... 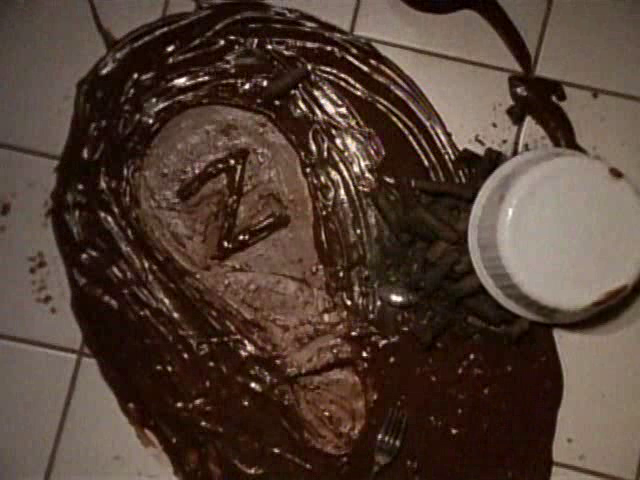 ...the bowl of cigars and the spilled pudding.  But wait?  Is that Zeebo's shoe print in the pudding?! 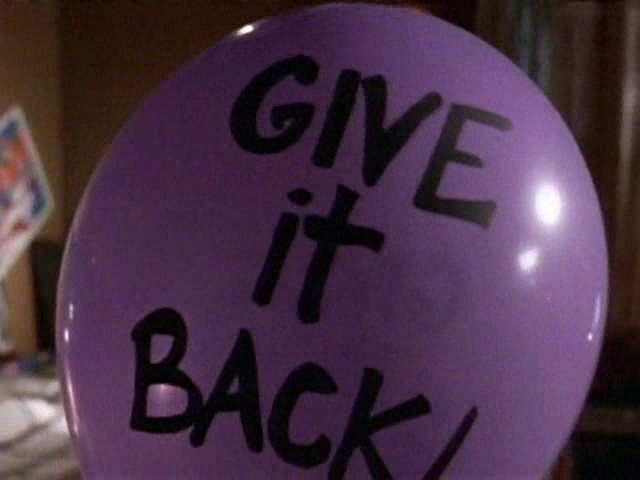 Josh escapes through his bedroom window and heads for Play Land with Zeebo's nose.

Josh leaves the nose and a box cigars at Zeebo's door.  Side note: Where did a kid get a box of cigars?!

Josh exits the funhouse and Zeebo has his nose back! 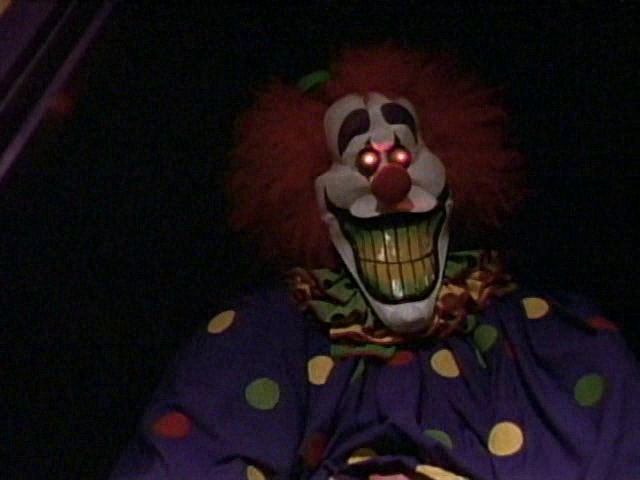 "It's the most fun in the park...when you're Laughing in the Dark!"

Next episode: S01E03 -- "The Tale of the Lonely Ghost"
Are You Afraid of the Dark? Midnight Society Nickelodeon Snick TV