Okay, so how many of you actually remember CAMPFIRE TALES?  It's a horror anthology movie, sort of along the same lines of TRICK 'R TREAT, but with an URBAN LEGEND spin.

I remember being on a big slasher movie kick back in the late '90s (hell, I still am!) and spotting this movie at a video store.  The cover art alone sold me.  A thing of beauty, really. 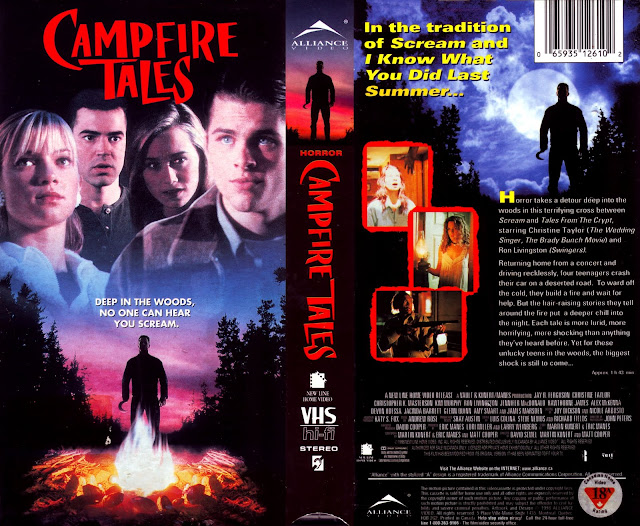 The movie was released direct-to-video in 1998, three days before URBAN LEGEND opened theatrically.  It's obvious, judging by the cast and production value that this was probably originally intended for a theatrical release as well.  But somewhere along the lines things got derailed.  Same thing happened with SHRIEK IF YOU KNOW WHAT I DID LAST FRIDAY THE 13TH -- filmed before SCARY MOVIE, but released DTV after SCARY MOVIE.

Either way, I scooped this bad boy up and raced home to throw it in the VCR.  Actually, if memory serves, I was spending the night at a buddy's house -- and we watched this together, devouring every bit of terror that we could.

The movie actually plays like an adult version of ARE YOU AFRAID OF THE DARK?...with a lot more blood and violence.  A group of teens are stranded when their car breaks down in the middle of the night...in the middle of nowhere.  So, naturally, they venture into the woods and start a small campfire.  One thing leads to another -- and to pass time -- they start telling scary stories.  It's basically everything you wanted to do when you were teenager, but never happened.

Is CAMPFIRE TALES a good movie?  No.  Is it a scary movie?  It can be.  Is it fun and entertaining?  Hell yes!  I recommend CF to any horror fan.  You'll either love it or hate it.  That's my stance.  I love it.  And I think you might, too.

Check out the super-nineties trailer below!

Even the production value of that trailer suggests a theatrical release was intended.

And if you're super curious, the whole movie is available on YouTube, albeit with foreign subtitles (English audio).