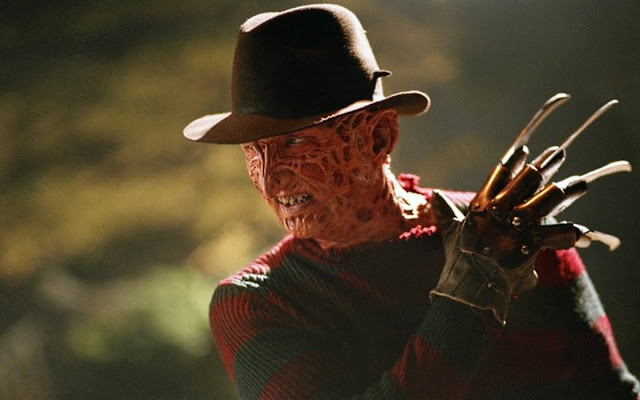 Okay, so surely a few of you have seen the "article" being shared on Facebook about Robert Englund returning to play an older Freddy in the new A NIGHTMARE ON ELM STREET reboot.  Actually, the full title of said "article" was Robert Englund signs on to play Older Freddy in new NIGHTMARE reboot with the subtitle Film is reportedly told in a flashback with aged Freddy narrating.

Now I have a confession.

I created the fake "article."  I didn't do it as a joke, though.  It was more of a social experiment.  I wanted to see how many likes and comments and shares it would get by people who strictly went off the headline alone.

The news of A NIGHTMARE ON ELM STREET getting a second remake was still fresh, so I decided to cash in on the hooplah...sort of.  Just a carefully crafted social experiment to see how many actually click on and read the articles they share and like. 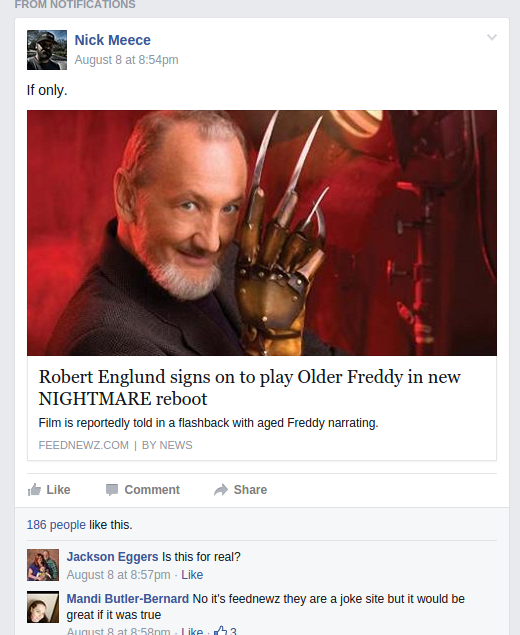 I originally posted the hoax article in the Facebook group A NIGHTMARE ON ELM STREET & FREDDY KRUEGER - FAN-CLUB.  But it has since spawned a life of its own.  I've seen it shared on numerous other horror groups and even multiple times in the same Freddy Krueger group.

Many fans knew it to be fake -- and good for them.  But I will admit that I was shocked at the amount of people who liked and commented on the post(s) and honestly believed it.  All it would have taken was ONE CLICK to see if it were true or not.  Therefore, I can't even really call this is a click-bait scheme, because it technically wasn't -- it was more of a catchy-headline-share-now scheme.  And it worked.

To those of you who fell for it, I truly am sorry.  It was just an experiment, nothing more.

Did you happen to catch this post in your news feed?
A Nightmare on Elm Street Facebook Freddy Krueger Robert Englund Social Experiment