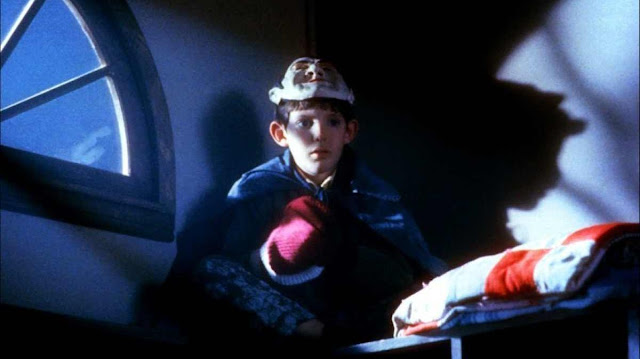 Heavy-handed. Schmaltzy. Disjointed. Tonally uneven. Cheaply imitative. Unnecessarily over-sentimental. Mawkish and saccharine. These are some of the more colorful adjectives I’d use to describe Lady in White.
When I saw Nick from MORBIDMUCH was taking guest submissions for his site on the topic of “your favorite Halloween films” for the late-October homestretch, I jumped at the chance to contribute a piece, naturally. (What can I say? Any opportunity I get to ramble on other people’s sites, I take.) For whatever reason, the first Halloween movie that popped into my head was 1988’s Lady in White. Don’t ask me why, but it honestly took me .2 seconds to decide on that film. Why was that my immediate go-to? I do not know. It ended up being a dreadful choice, but I’m no quitter: I told Nick I chose Lady in White, so I’m gonna talk about Lady in White.
Now, admittedly, I hadn’t watched Lady in White all the way through since I was a very small child. I mean, we’re talking multiple decades. But I recall some very vivid, memorable imagery from the film, not to mention that hauntingly simple and strangely beautiful poster/VHS box cover. In fact, I think I even remember being scared by the movie (!) — so any doubts I had over choosing Lady in White were a million miles out of my mind. The memories I did have were vaguely positive (if not wholly generic), so what could it hurt?
In 1981, Frank LaLoggia made his directorial debut with Fear No Evil. For the life of me, I cannot get into that film. I own it on DVD and have watched it several times, but I can never enjoy it. Some people I know swear by it, but I just can’t do it. To be fair, LaLoggia was only 27 at the time and it was an ambitious project, but then again Paul Thomas Anderson was 27 when he made Boogie Nights, and well, I guess the moral is: age means nothing when it comes to talent.
Somehow that movie was apparently successful enough to secure LaLoggia a studio-backed follow up with an even bigger budget — almost $5M — as well as a cast of familiar faces, such as Lukas Haas, Alex Rocco, Len Cariou, Tom Bower, and Jared Rushton. Alas, more money and better talent aren’t enough to save Lady in White.
Set in a small coastal town during the fall of 1962, Lady in White follows a young boy who ends up getting locked in his elementary school after hours and is attacked by a mysterious stranger. He survives the attack, but now he starts seeing the ghost of a little girl who was killed by the same shadowy figure, and it’s up to this little boy to figure out who it is and help allow this unsettled spirit to finally rest in peace.

My main issue with Lady in White is that it wants to be every genre ever: murder mystery, ghost story, family film, courtroom drama, racially-charged socio-political film, fantasy, dramedy, nostalgia film, holiday film. Literally every single one of those elements plays some sort of relevant role in the movie. There are ghosts, steel mill workers, flashbacks, hints at pedophilia, and a goddamn assassination! It’s completely insane. Imagine The Lovely Boneswith hints of A Time to Kill, produced by Steven Spielberg and directed by M. Night Shyamalan, and you’d get Lady in White. That’s the level of crazy we’re talking.

It’s very clear, however, that there’s no one director this movie wants to emulate more than Steven Spielberg. This movie is straight from the Spielberg handbook: one part E.T., one part Close Encounters of the Third Kind, and one part Poltergeist. I mean, they even have a scene where a kid jumps his bike over this huge gap, ala E.T. The nods and references come in a flurry.

At the heart of the movie, there is a fun and enjoyable story — a whodunnit with elements of fantasy, like The Hardy Boys meets Scooby Doo. But there’s so much superfluous bullstuff that bogs the movie down, distracting and unnecessary elements that take away from it rather than add to it. For example, the boy has a goofy grandfather who keeps trying to covertly smoke cigarettes but the grandmother keeps catching him. In a more talented director’s hands (cough*Spielberg*cough) this bit might come off as whimsical or endearing, something that adds a realness to the characters. But here, again, it’s more distracting than anything else. It keeps happening. We get it! The grandpa wants to smoke but the grandma won’t let him! You don’t need to have 5 separate scenes peppered throughout the movie to make this point.

In the end, the movie — much like my articles — would have benefitted from a very judicious editor. One who could’ve trimmed all the fat and gotten down to the meat of the story. What I’d love to see is a recut of this movie; with the right edits, the final product could be closer to Spielberg than LaLoggia had originally hoped for. Steven Soderbergh, if you’re reading this: I have your next project right here.