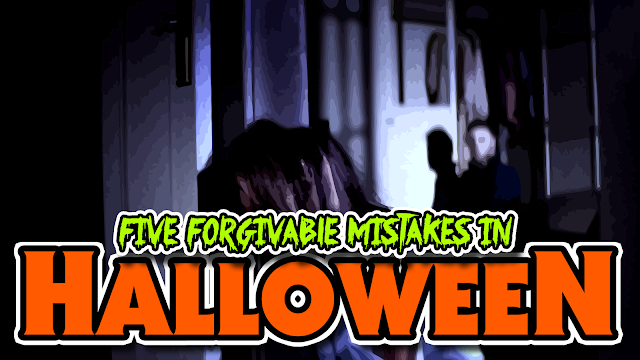 Yes, I know -- 1978's HALLOWEEN is a classic.  I'm not disputing that.  I love it -- and it might possibly be my favorite movie of all time (neck-n-neck with FIGHT CLUB).  But HALLOWEEN, no matter how great, isn't without its share of faults.

I've put together a list of FIVE FORGIVABLE MISTAKES.

Early on in the film, when Laurie is returning home from school, it's apparent that it is a super dry day...no clouds or rain in the sky.  Yet, when Laurie strolls up her front lawn and into her house, the sidewalk is noticeably wet.  This falls in line with the whole "movie goof" thing.  Yeah, it could be from a sprinkler system, but that's not likely -- the wetness goes all the way down the street -- and it was 1978.

Exactly when did the hardware store get broken into?  When Laurie and Annie are headed to their respected babysitting gigs (approximately 1-2 hours after school), they stop at the hardware store where Annie's father, Sheriff Bracket, is standing outside while the alarm sounds off.  We're left to assume that the store had just been robbed, but why would the alarm be going off in the middle of the day (assuming the store was open for business)?  Also, earlier in the day Laurie saw Michael Myers standing outside her school wearing the mask that was stolen from the store -- and it also appeared that he had it on when she first dropped the keys off at the old Myers place earlier in the morning.

Why it's forgivable: The film felt the need to tell us where and how Michael got a mask.  We know he got the coveralls from the Phelp's Garage mechanic -- so it's only natural that we learn he got the mask, rope and a couple of knives from the hardware store.

Michael follows Annie and Laurie as they arrive at their babysitting destinations, which are right across the street from one another.  Annie drops Laurie off at the Doyle house and then pulls into the Wallace driveway, directly across the street.  Michael parks on the street directly in front of both houses, exits the car and begins his night.

However, later in the movie, when Dr. Loomis finally arrives on the scene, he finds the car Michael was driving parked a few blocks away.

Why it's forgivable: Again, this little goof doesn't hurt the plot or story at all.  And honestly, if it isn't pointed out to you, you might not even notice.  Also, it's entirely possible that Michael moved the car at some point during the night.

Just as the third act is beginning Annie, locks herself in the detached laundry room behind the Wallace house.  Obviously, it isn't really possible to lock yourself into a detached annex.  But here's the second goof of this scene: when Lindsey finally arrives to let Annie out, she opens the door with ease, steps in and closes the door.  Wouldn't this essentially re-lock the door, trapping them both inside?

Why it's forgivable: First of all, it's a movie.  And like the others, it has no bearing on story or plot, but it gives a reason for Annie and Lindsey to both be outside of the house while Michael lurks in the shadows.

When Lynda and Bob pull up to the Wallace house and exit the van, Bob picks Lynda up and carries her to the house, leaving his passenger door on the van wide open.  Now later, when Laurie looks out the window of the Doyle house and sees Bob's van parked outside the door is clearly closed.  Either a strong gust of wind closed it, or Michael just has a knack for tidying up.

Why it's forgivable: It's just a guy forgetting to shut a door, no big deal -- even though us, as the audience, is quietly screaming in our heads "Shut the goddamn door!"

There you have it: Five forgivable mistakes in HALLOWEEN!

I realize I left a few out, but oh well.  Here's five that I'll forgive.