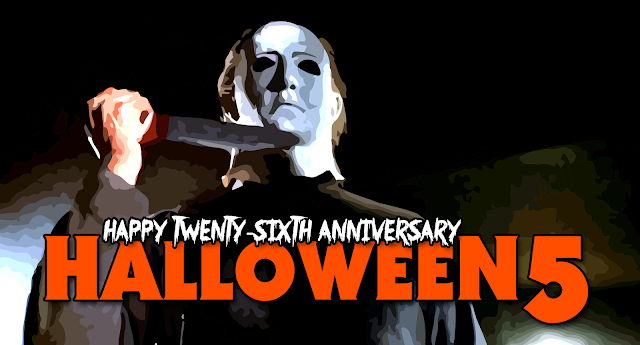 Twenty-six years ago, Michael Myers returned from a year-long hibernation to seek his revenge of his niece Jamie Lloyd (Danielle Harris) in 1989's HALLOWEEN 5: THE REVENGE OF MICHAEL MYERS.

Even though HALLOWEEN 5 is widely regarded as a weaker entry in the franchise, it does, like most slashers, hold a special charm.  We're able to see the aftermath and devastation from HALLOWEEN 4 play out a year later -- and see the growth of Jamie Lloyd.

However, HALLOWEEN 5 can be blamed for introducing a few pieces that HALLOWEEN 6 attempted to put together -- specifically, the Thorn tattoo on Michael's wrist and the mysterious man in black.

Don Shanks' portrayal of Myers in H5 was always one of the more violent variations we've seen, at least to me, anyway.

So here's to THE REVENGE OF MICHAEL MYERS, a film that also had another character named Mikey -- not that it matters.