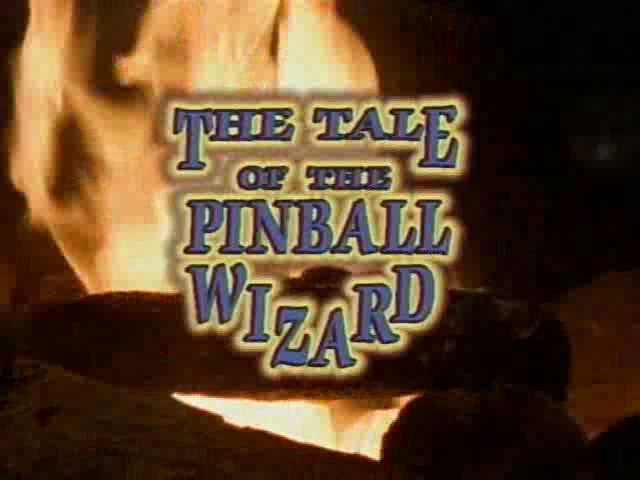 So here we are -- already at the season one finale.  I look back the first twelve episodes and think, "Wow, that's a lot of screenshots."  But fear not, because here is episode thirteen.  The episode begins with a couple of the members playing those old hand-held video games.  You know the ones -- which leads us into tonight's tale. 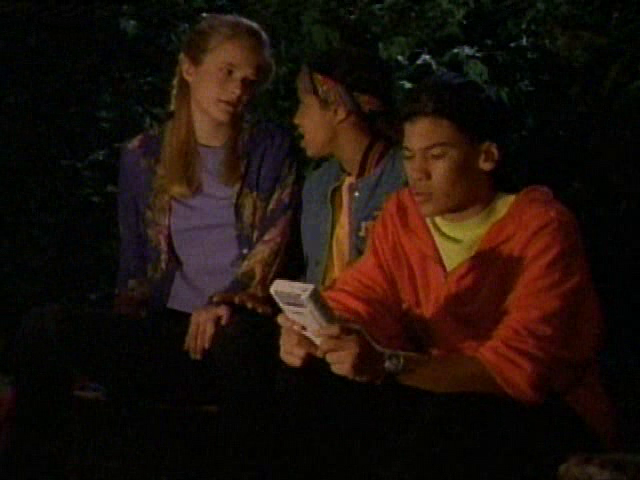 They even argue over a Game Boy.


The tale kicks off with Ross Campbell, a teenager with too much free time, scouring the mall for loose change. 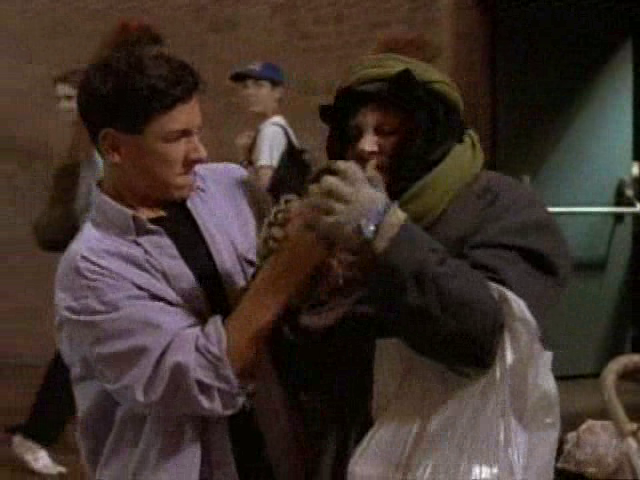 He even ends up fighting over a couple coins he pulled from a fountain with a bag lady. 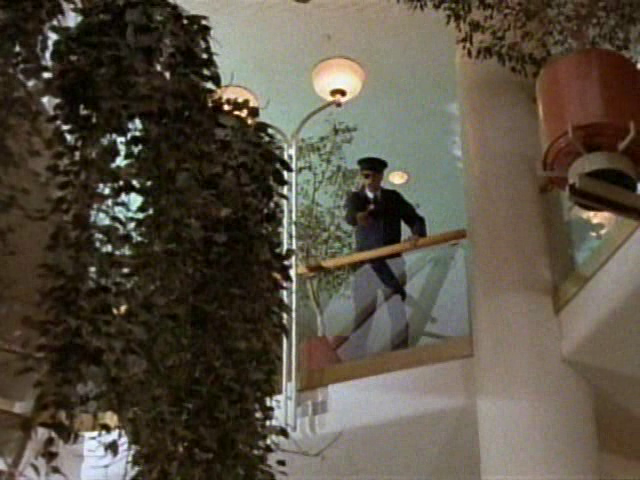 Finally, a mall security guard breaks it up and Ross takes off running. 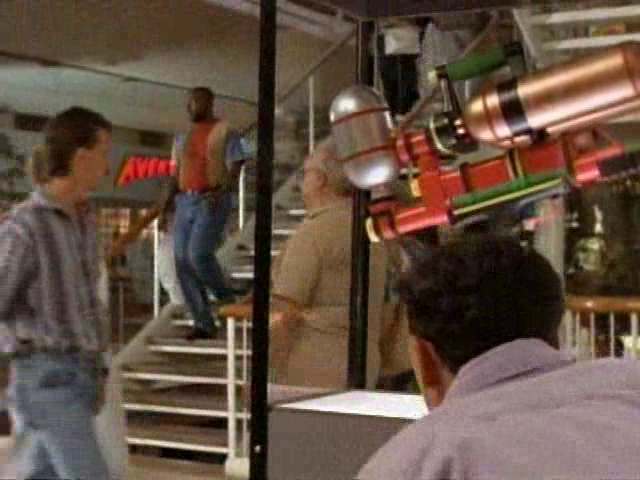 And just look at that badass Super Soaker he hides behind!  Color me fucking green with envy. 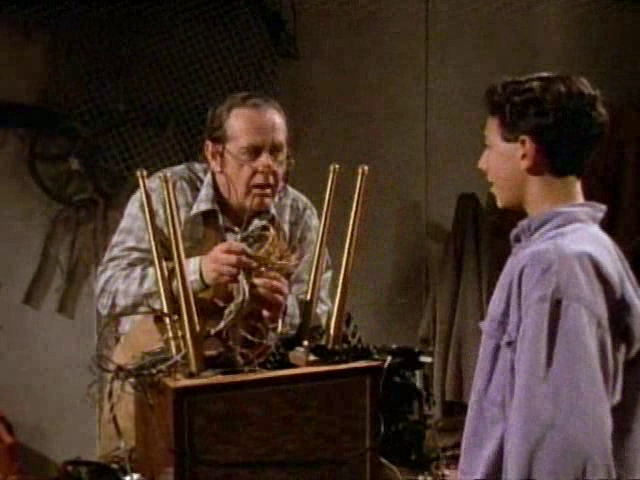 Ross enters a store called Olson's where he talks to the owner, Mr. Olson, about a job -- but Mr. Olson refuses to hire him. 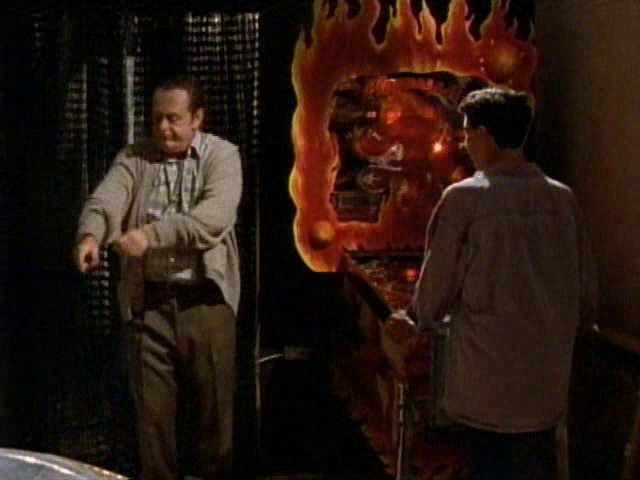 Eventually, Mr. Olson tells Ross that he's closing shop for the day, despite it only being three o'clock.  Ross tells Mr. Olson that he should let him watch the shop while he's away.  Sort of a trial by fire type of deal.  At first, Olson turns the idea down but then slowly gives in. 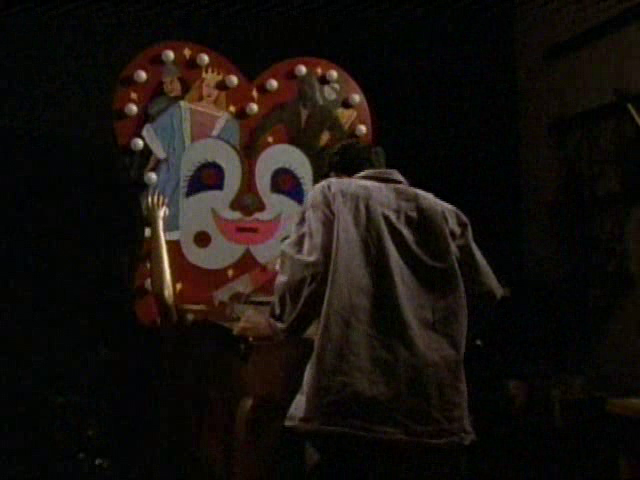 But, of course, as soon as Olson leaves, Ross heads straight to the back room and pulls the tarp off of the new pinball machine. 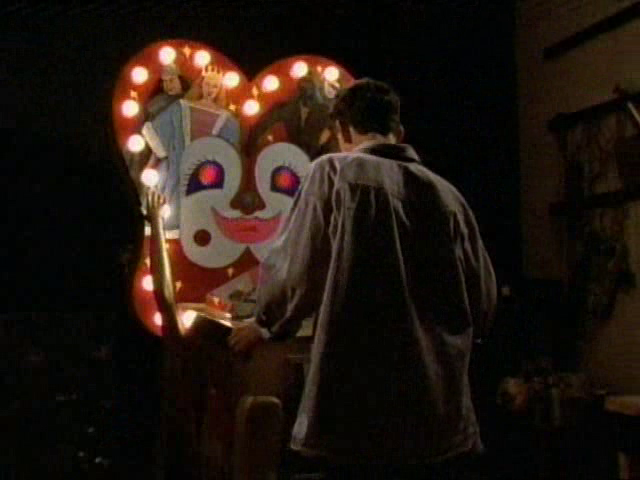 He inserts some coins and the machine comes alive.  And before we know it, Ross is consumed with the game. 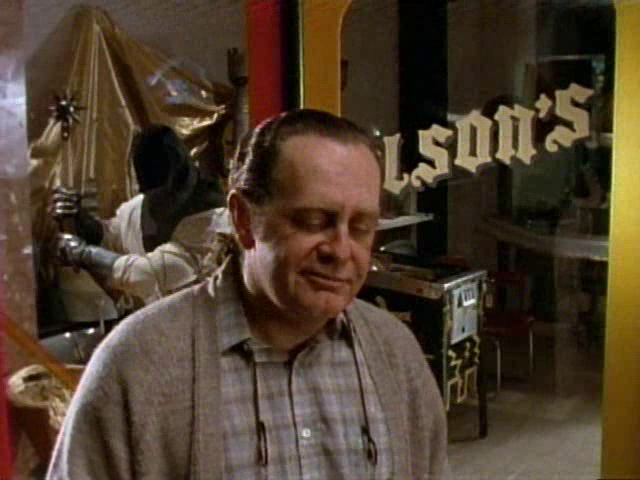 Just outside the store stands Mr. Olson.  Smiling.  Has he set Ross up?

Ross continues to play the game for a few more minutes until he hears the bell at the front counter ringing. 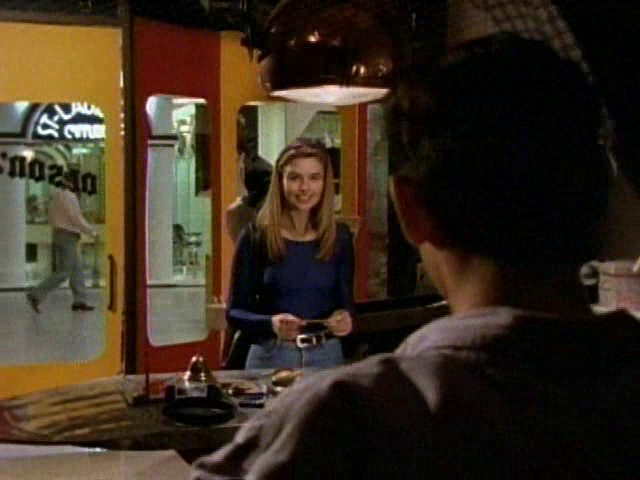 Much to Ross' delight, it's a pretty girl who is looking for Mr. Olson.  She dropped off a music box a few days and has returned to pick it up.

Ross struggles to come up with some sort of answer for her.  And he finds out her name is Sophie.  She describes the music box as a "thrown in a gold box."  He retrieves the box for her, but it clearly isn't finished yet -- he then admits to her that he doesn't technically work there. 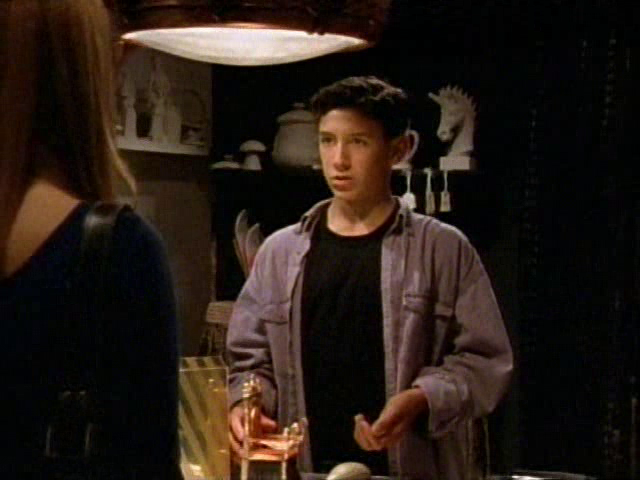 But he does relay that he is watching the store for Mr. Olson.  Sophie tells him that she has some things to do so she'll be back later.  Once she leaves, the pinball machine in the back calls for Ross, metaphorically, of course. 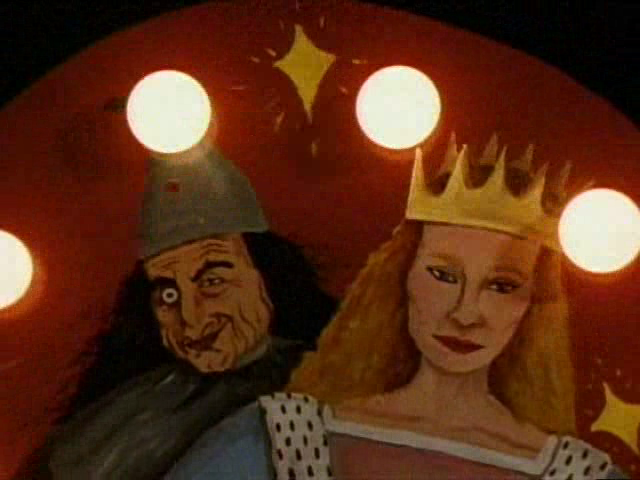 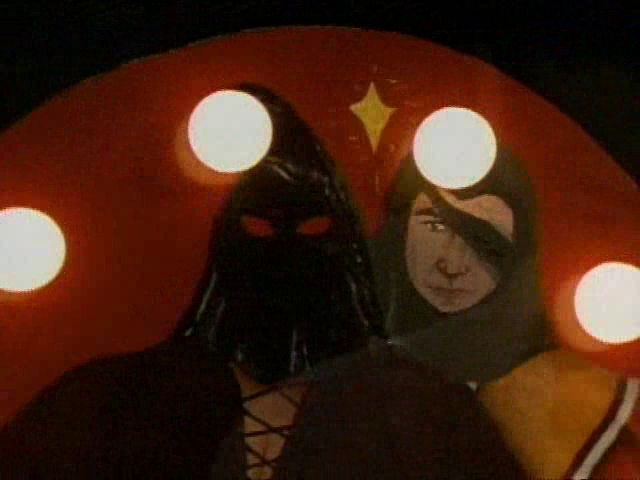 Ross plays so long that he loses track of time.  Not only is Mr. Olson still not there, but the mall has now closed. 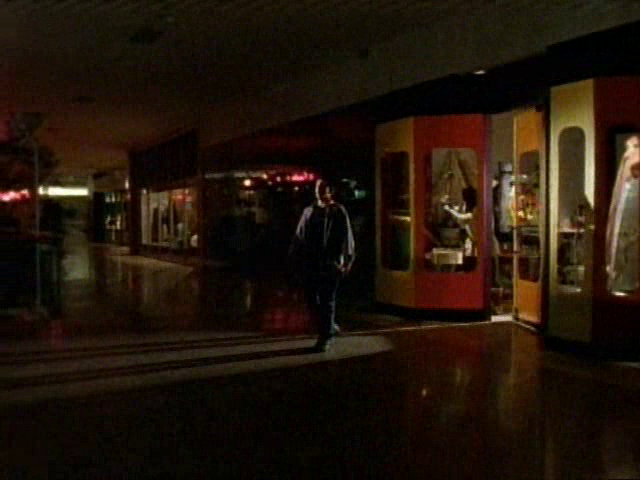 Suddenly, a phone begins to ring and Ross rushes to it. 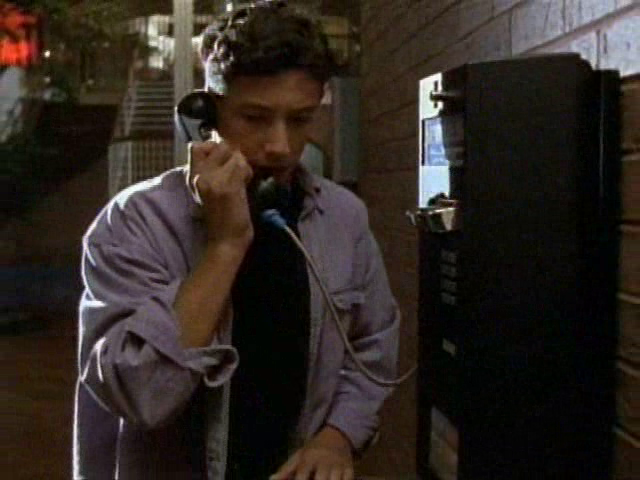 At first no one is on the line, then a voice speaks up, "Got an umbrella?"  And suddenly, it begins raining quarters over the fountain.  So needless to say, Ross jumps in and begins filling his pockets. 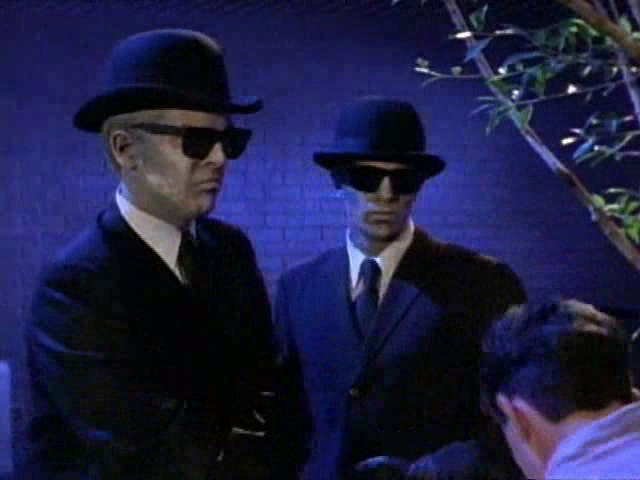 And then he sees two strange men walking.  He stops them and they grab him.  Ross pulls away, pulling one of the men's hands off!

And then a bunch of those strange guys come walking towards Ross -- and he notices that they're afraid of water. 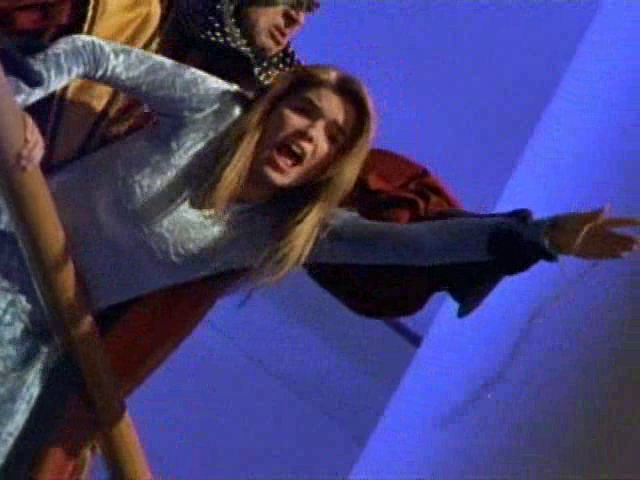 He hears a girl screaming for help -- and looks up to see Sophie in peril.  She tosses him a key and tells him to get the tiara from the vault.

Clueless, Ross begins opening the mall lockers.  Eventually, he finds Sophie's head band and the escalator lights up.  He goes to it. 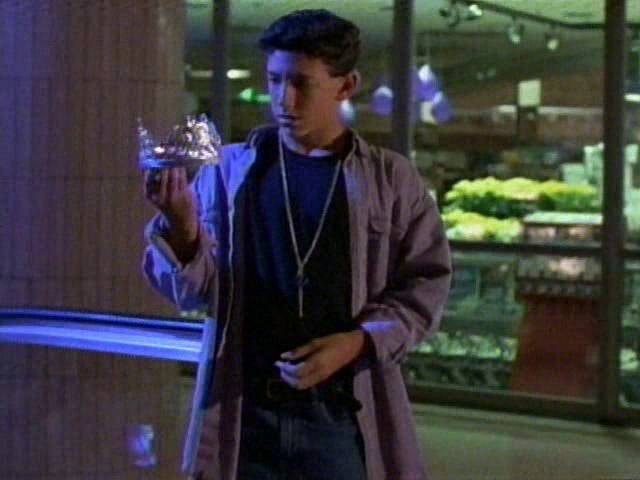 Once he reaches the second floor, the head band transforms into a tiara.  Still not sure why she tossed him the key...since the lockers were unlocked.  Also, the quarters in his pockets have turned into little metal pinballs.

In the distance, Ross sees Sophie and runs to her, but once he finally catches up, an evil witch steps in his path. 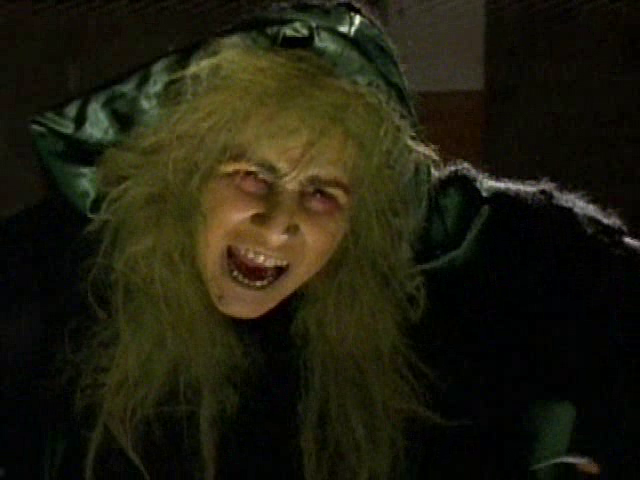 She starts blowing a strong wind towards Ross.  He falls and she grabs the tiara -- and then vanishes in a green cloud.

Sophie's voice calls out and tells Ross to get the music box.  So Ross races back to the shop to get it when he finds Sophie there, chained up.  He uses the key she gave him earlier to free her.  She grabs the music box and tells him they need the tiara now.  Just then, they're attacked... ...but manage to escape.

They see the witch attempting to put on the tiara, so Sophie opens the music box and it begins to play. 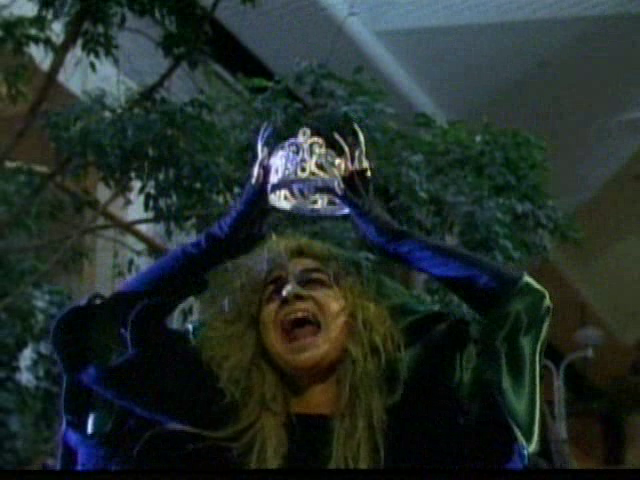 And the tiara magically disappears.  They hide the music box in a trash can and Ross manages to snag the attacker's mace. 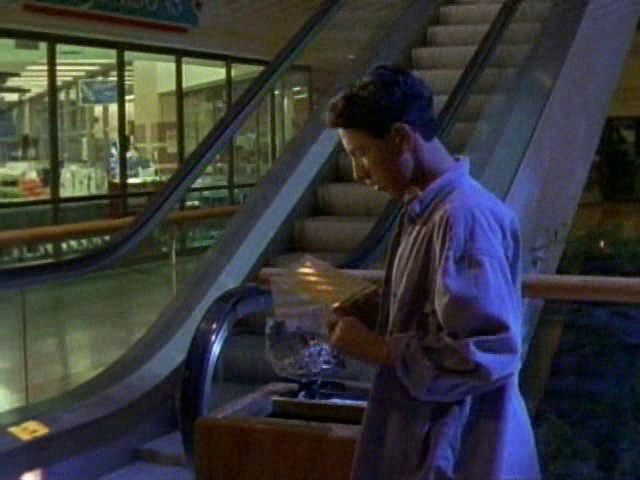 Sophie gets captured again and Ross ends up with the tiara and the music box.  And now he must get to the third level.

Ross finally starts adding up the pieces and realizes everything that's going on is what happens in the mysterious pinball game.  He understands that all he has to do is crown Sophie on the thrown.  The music box transforms into a giant thrown, by the way. 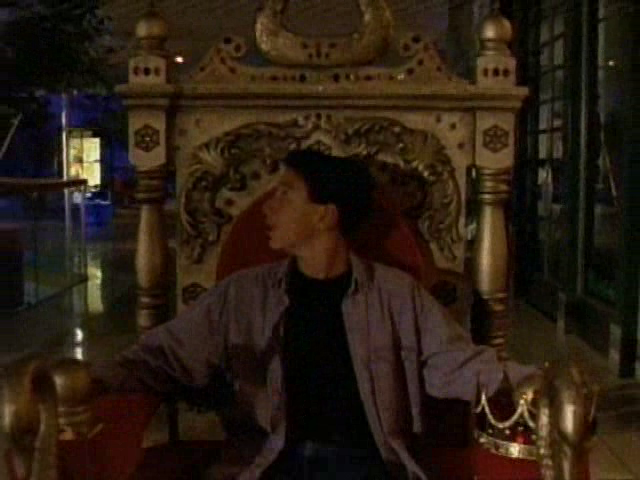 Suddenly, the thrown takes off.  And Ross notices he's headed right for the witch and a giant spider web. 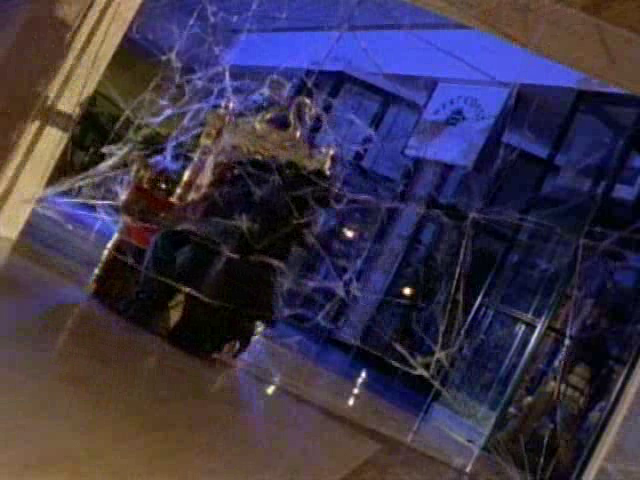 But no worries, Ross plows right through them both.  But, Ross runs into trouble and is thrown in an elevator that takes him back down to the level one.  He grabs the mace and smashes the glass and grabs that awesome Super Soaker. 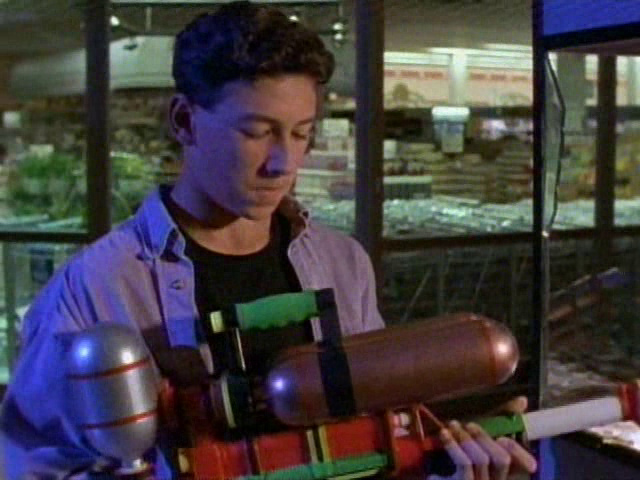 Back on the third floor, an evil guy is preparing to be crowned. 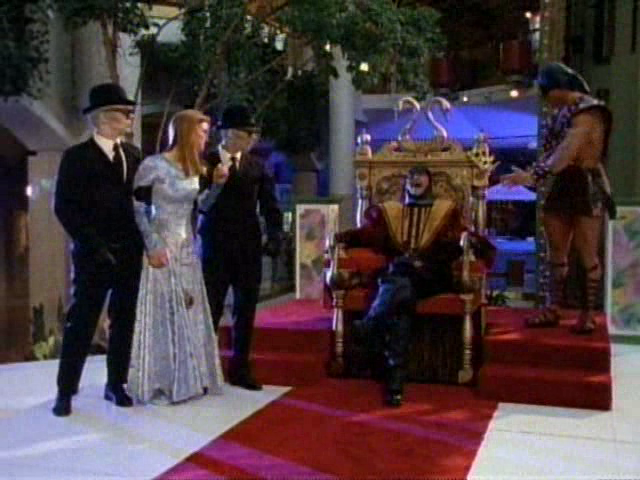 Game over.  Right?  Wrong.  It appears that Ross is now a part of a permanent game. 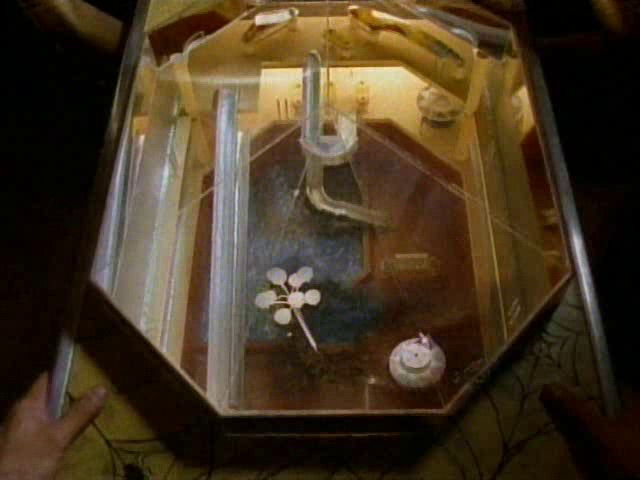 And he'll never get out.

Next episode: S02E01 -- "The Tale of the Final Wish"
Are You Afraid of the Dark? Midnight Society Nickelodeon Snick TV