The three trilogies of the FRIDAY THE 13TH franchise 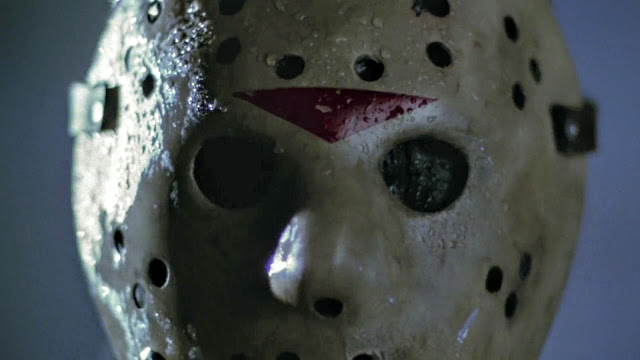 The FRIDAY THE 13TH franchise has a lot to offer.  You know, like blood, creative kills, boobs and the occasional missing pet.  But the first eight films also offered up three trilogies.  Three sets of three films that told their own story.  We'll leave the original 1980 FRIDAY out, because really, it's almost like a prequel or stand-a-lone film compared to what followed.


What's most impressive is that Paramount was able to squeeze these three trilogies into seven films!  Like I said earlier, we'll exclude the original -- and we're also leaving out the New Line entries (JASON GOES TO HELL, JASON X, FREDDY VS. JASON and the remake).

So let's get into it already... 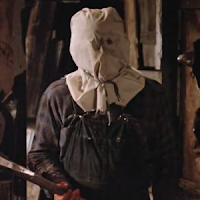 Okay, so here's the first of the three trilogies: The Next Day Trilogy (you know, because each installment picks up where the previous one ends).

Considered the favorite by many, F13 PART 2 was the first movie to introduce Jason Voorhees as the killer and left out the whodunit mystery that the first film had.  PART 2 picks up with a full-grown Jason stalking Alice, the original's final girl.  He succeeds in exacting revenge and heads back to Camp Crystal Lake.  There, he's met by a new group of counselors-in-training at the camp next door.  The film comes to a climax when Ginny buries a machete into Jason's shoulder. 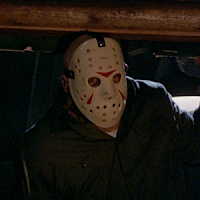 Now F13 PART 3 picks up the next night after Ginny takes down Jason (we know this because of the radio/TV broadcasts). Even though Jason's look this time around completely different than PART 2's look, he can still be seen early on in the film wearing the flannel shirt (while he's hiding in the clothesline). PART 3 is most notable for two reasons: First, it's in 3D -- and second, THIS IS THE ONE WHERE JASON GETS HIS HOCKEY MASK!

PART 3 concludes with Jason getting an ax embedded into his forehead.  And the film presumably ended on Sunday the 15th.

And finally, rounding out the first of the three trilogies is F13: THE FINAL CHAPTER.  Of course we now know that part four was not the "final chapter," but oh well.  It was meant to be.  THE FINAL CHAPTER picks up exactly where PART 3 ended, thus, taking place precisely on Monday the 16th.  Yes, THREE DAYS OF TERROR! 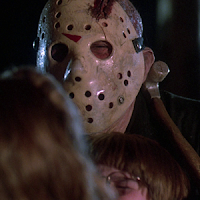 THE FINAL CHAPTER is where we're introduced to Tommy Jarvis, played by Corey Feldman.  Every kid in Tommy's age-range watching this movie wanted to be him.  He was into cool shit and had an awesome room (not to mention the fact that he had an incredible view of the cabin next door).

Oh, and if I haven't mentioned it yet, THE FINAL CHAPTER is hands-down my favorite in the series.

This time around, Jason is handed defeat by Tommy's older sister Trish while he distracts the machete-wielding maniac by making himself look like a 1957-era Jason.  Trish slams the machete into the side of Jason's melon.  And thus, the first trilogy has ended. 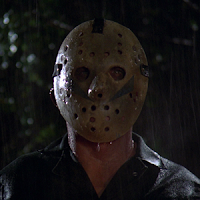 We've already been introduced to the first entry of this second trilogy -- as it was the last entry in the first trilogy.  This is The Tommy Jarvis trilogy.  Yeah, his story isn't done yet.  So THE FINAL CHAPTER is the first in this trilogy, but then we're introduced to an older teen-aged Tommy, this time played by John Shepherd, in F13 PART V: A NEW BEGINNING.

PART V was once considered the bastard child of the series, but has found its following since.  Not having Jason as your killer can do that, you know.

But in the end, the impostor Jason is stopped (killed).  AND TOMMY JARVIS LIVES TO SEE ANOTHER SEQUEL! 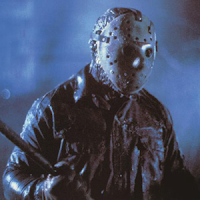 Which brings us to F13 PART VI: JASON LIVES.  Once again, Tommy Jarvis is our main protagonist, this time played by Thom Mathews.  The film picks with Tommy and a buddy on their way to the cemetery where Jason is buried.  Tommy, haunted by the memories, is determined to kill Jason once and for all (newsflash: he's already dead!).

The movie then goes back to Camp Crystal Lake, which has been renamed Camp Forest Green.

This time, Tommy comes out on top once again, chaining Jason to the bottom of the lake, a seemingly watery grave.  So say goodbye to Tommy Jarvis, because his story is done.

Ah, yes, The Zombie Jason Trilogy!  Again, we were initially introduced to this trilogy with the last trilogies final chapter, JASON LIVES.  Jason was resurrected by lightning, thus, making him an undead zombie.  And we last saw Jason chained to the bottom of Crystal Lake... 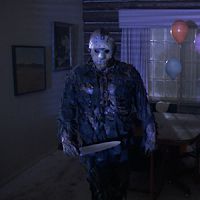 ...where we see him again at the start of F13 PART VII: THE NEW BLOOD.  By all appearances, Jason seems to be dead.  And on the surface of the water, a young girl named Tina accidentally kills her dad using her telekinetic powers.

Years later, Tina returns to her family's cabin to help get over her father's untimely death, aided by her mother and her psychiatrist.  Tina stands on the dock one night, upset, and you guessed it, HER TELEKINETIC RAGE BRINGS JASON BACK TO LIFE!  Another undead resurrection!

The film is very much "Carrie meets Jason" as Tina uses her powers to thwart Jason -- and the ghost of her father pulls Jason back down to a water grave in the end. 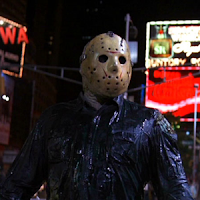 But wait, there's more!  At the beginning of F13 PART VIII: JASON TAKES MANHATTAN, we once again find Jason's corpse nestled at the bottom of the lake, under the debris of the sunken dock.

A large boat passes over on the surface, and the boat's anchor grabs a power line and...yup, electrocutes Jason's body, bringing him back from the dead once more.  Undead resurrection #3.

And despite the title, JASON TAKES MANHATTAN, the film mostly takes place on a cruise ship...on it's way to NYC.

On the boat, Jason encounters Rennie, a girl who is afraid of water and supposedly had an experience as a child with young Jason under water.  I'm not even going to try to explain it.  It's...complicated.  But, nevertheless, PART VIII is one of my favorites -- not for being good, but for being bad.  Also, it's a great midnight movie.

Rennie eventually defeats Jason in the sewers of New York -- washing him in toxic waste and...making him turn back into a little kid?  Weird.  But oh well.

Well that concludes our list of the three trilogies of the FRIDAY THE 13TH franchise!