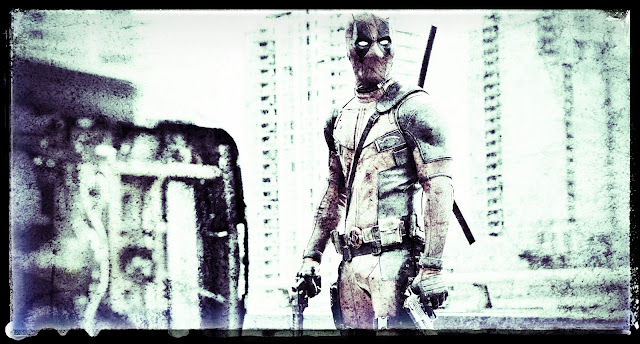 I don't even know where to start.  DEADPOOL was all that and a bag of chips.  Seriously.  It was so good.  Very rarely does the marketing for a movie match the tone and feel to a T -- but DEADPOOL nailed it.  All of it.  And it was glorious.

I'm going regurgitate something that just about every news outlet and tweeter have already stated: Ryan Reynolds was born to play Wade Wilson aka Deadpool.  If you were on of the everyone who was let down by the handling of the character in X-MEN ORIGINS: WOLVERINE, then fear not.  The character has been done total justice this time around, thanks to the tireless efforts of Reynolds and company.

Just to catch you up, Reynolds plays Wade Wilson, an ex member of special forces (translation: he's a total badass, even before he becomes Deadpool).  Wilson falls in love with Vanessa (played by the beautiful Morena Baccarin) and later finds out he has brain, prostate, lung and liver cancer.  Ouch.  He's contacted by a man who claims he can cure him.  Wilson takes him up on the offer without Vanessa's knowledge.


Instead, Wilson is thrust into a series of "torture" tactics after being injected with mutant DNA -- in hopes of mutating Wilson.

In the end, Wilson is cured of all his cancers and made seemingly invincible...he can regenerate lost and damaged tissue, etc.  But the transformation leaves Wilson horribly burned.

The basic premise of the movie is Wilson, now known as Deadpool, seeking revenge on the man who did this to him.

I said this in a tweet earlier this week, but Ryan Reynolds is every bit of this generations Chevy Chase.  He's comedy gold.  Of course, we already knew this after films like VAN WILDER, WAITING..., JUST FRIENDS and his cameo in HAROLD & KUMAR GO TO WHITE CASTLE.  But this.  This is Reynolds' finest --  a role he was truly born to play.

Admittedly, I didn't know much about Deadpool going into it, all I had was my single-viewing of X-MEN ORIGINS: WOLVERINE back in 2009.  Even then, I was 110% sure the character was handled all wrong.  And I was right.  But 2016's DEADPOOL seems to have corrected that.

DEADPOOL most certainly isn't a movie we deserved, but most definitely is one that we needed.  A superhero movie with a hard R-rating that breaks the fourth wall throughout.  And it was awesome.  It's a movie that pulls no punches and leaves everything on the table -- a true labor of love from the filmmakers.

I'll probably see the movie again at some point, but I highly doubt my opinion will change any.  See this movie if you can.  You won't regret it.

What did you think of DEADPOOL?