Why CURSED would be successful if released today. 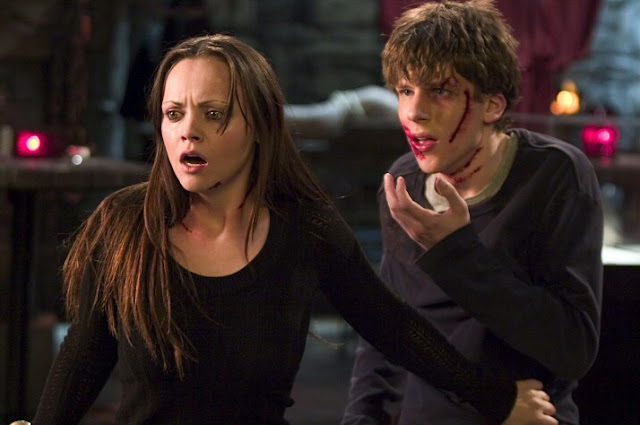 If the 2005 film CURSED, another Wes Craven/Kevin Williamson team-up, were released today, would it have more audience appeal?  Be more successful?  Possibly spawn a sequel?  Let's dissect this.

CURSED was the long awaited reunion of director Wes Craven and screenwriter Kevin Williamson -- the two hadn't worked together since 1997's SCREAM 2.  So when news broke the two were teaming up to do a werewolf movie with a real world/modern twist, slasher fans were ecstatic.  Sounds a lot like their earlier, and most successful, film SCREAM -- a teen slasher set in the real world.

What made the anticipation even better was the cast that was initially being assemble: Christina Ricci, Skeet Ulrich, Heather Langenkamp, Scott Foley, Corey Feldman, Omar Epps -- the list just grows.  In fact, everything was going great until major rewrites and reshoots were ordered.  This changed everything -- sort of.

With the movie nearly complete, much of the cast were recast (mostly due to scheduling conflicts) when production halted and the movie was basically scrapped and completely reshot.

To say the least, the film finally opened on February 25, 2005 to a $9.6 million opening weekend.  Sounds good, right?  Not so fast, the film ended up only grossing $19.2 million, not even close to enough to warrant a sequel, especially considering the film had a total budget of $35 million.  A total loss.  Bummer.

But lately I started thinking: maybe CURSED was just a little ahead of its time.  Think about it.  SCREAM was very much a parody of horror films done in a serious manner -- but in order for it to work, the films in which it "spoofed" had to not only come before it, but relatively recently.  CURSED was very much all of the above but for werewolf/monster movies.  The problem is, a major werewolf movie hadn't been released for quite some time, so the generally audience hadn't the slightest clue on the subject.

Fast forward to 2013.  Werewolves are back in the limelight.  A remake of THE WOLFMAN was released (followed by a DTV sequel), the UNDERWORLD movies exist and let's not forget the THE TWILIGHT SAGA.

It begs the question: if CURSED were released today would be more successful?  And I believe the answer is a clear and definite YES.  It's a shame it was just a head of its time, really.

Perhaps a deluxe edition Blu-ray or DVD loaded with special features, including ALL the the cut and scrapped footage, was to be released and advertised to the max then maybe, just maybe, this little "gem" may in fact find its home and rightful place in cinema history (ala SCREAM).

Just my thoughts.  Yours?


Not enough?  How about Rick Baker's original design for the werewolf!