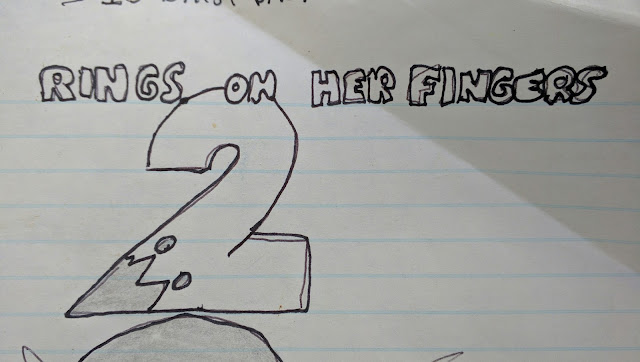 We all have humble beginnings.  No matter your hobby or trade.  And, well, this is mine.  While going through some of my old belongings the other day, I stumbled upon "Rings on Her Fingers 2," a short story I wrote when I was 12-years-old...and guess what?  Here it is!


As embarrassing as this may be, I'm going to share it.  Actually, I'll share two versions of the story: the first will be photos of the actual story and the second will be a transcribed version...exactly how it was written on paper.

When I was in sixth grade, in my Language Arts class, we were given the first couple paragraphs of a story and told to finish it.  The story was called "Rings on Her Fingers."  I can't find the first one, but I did find the sequel I wrote to it (which was completely unprompted, by the way).

As you'll notice, I drew most (all) of my inspiration from the Scream films. 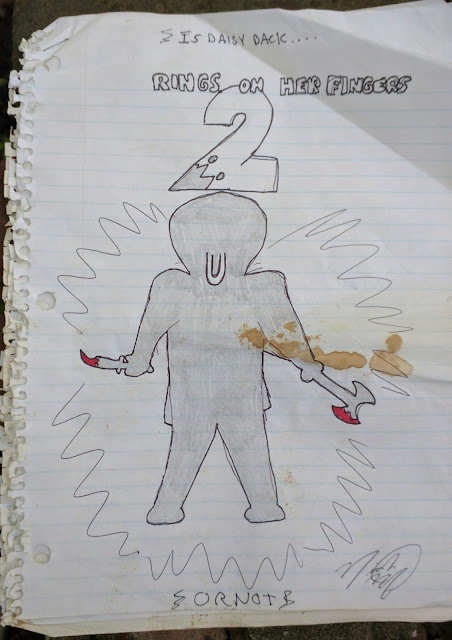 Just look at that fuckin' title page.  A thing of beauty (no, no it's not).  It's just the silhouette of the killer in the story, but if you're wondering what exactly the killer was supposed to look like, well, imagine him wearing a big parka like the one in Urban Legend and a Ghost mask from Scream.  Also, that's probably where the dual weapons came from as well. 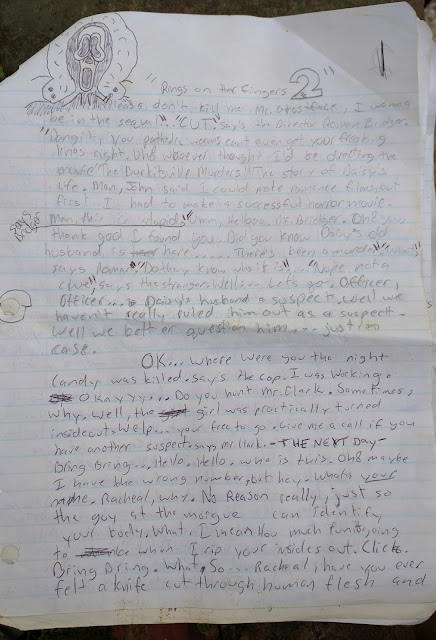 Well, fuck, if you were really wanting to know what the killer looked like, I drew him again up in the corner.  Visuals, man. 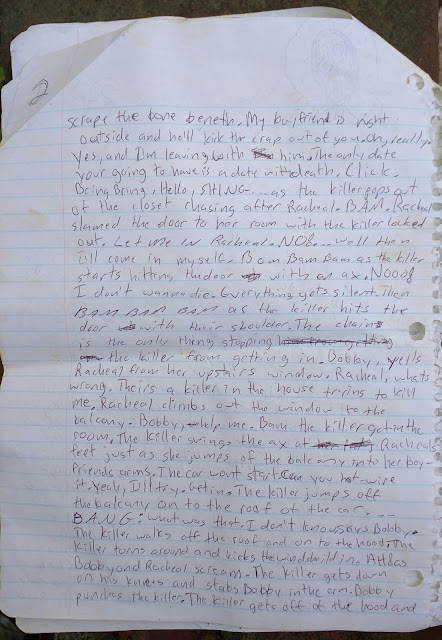 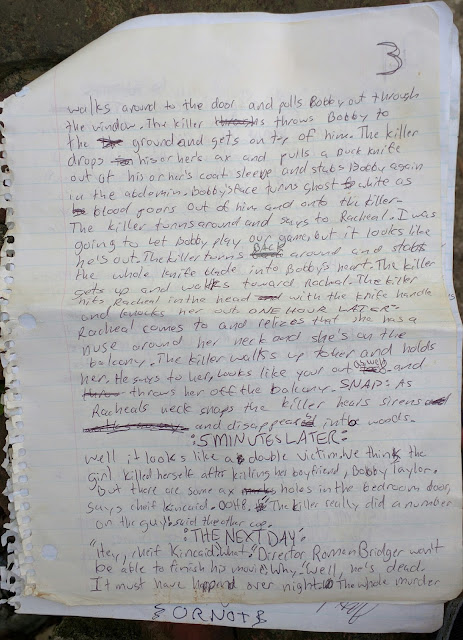 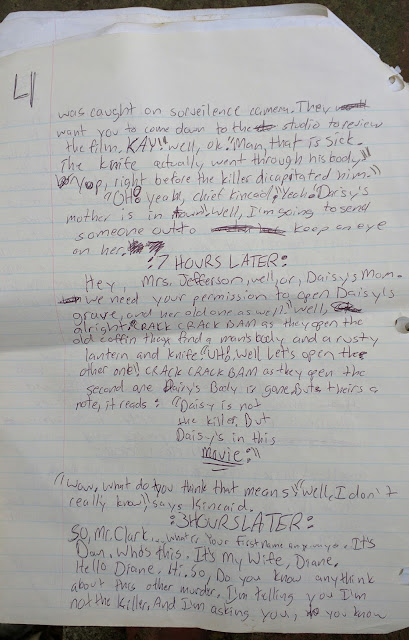 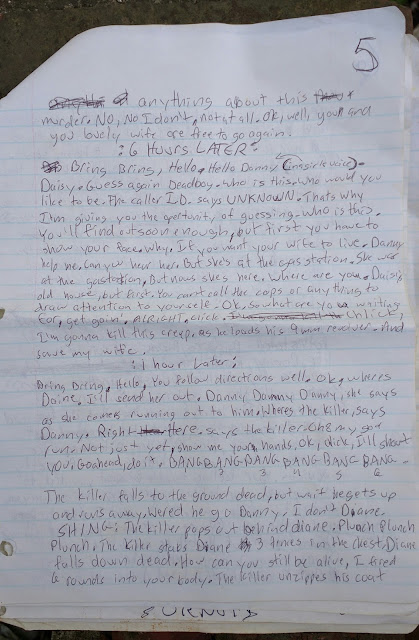 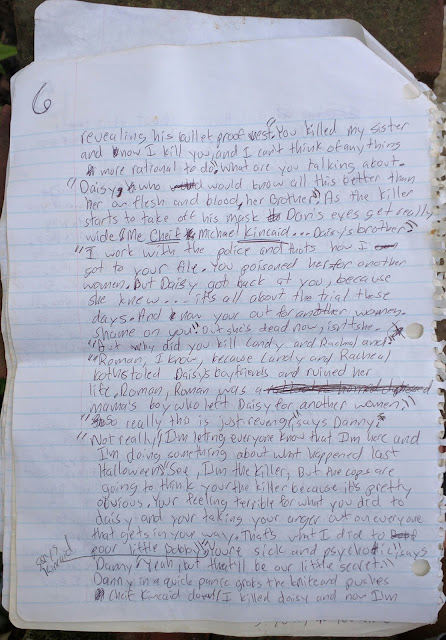 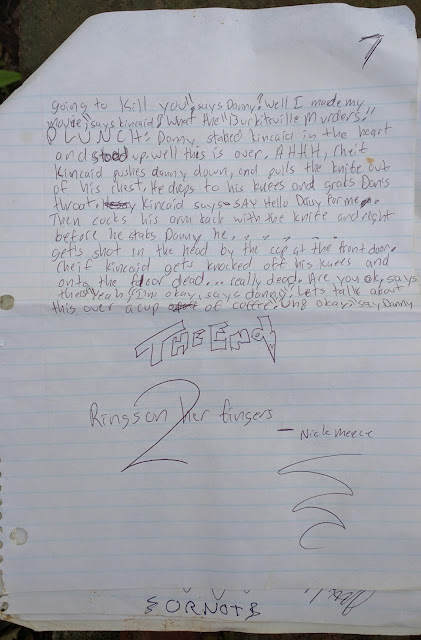 Well, there it was.  Seven pages of running stream of consciousness.  Thing is, I knew how to write, just didn't do it correctly for whatever reason.  Damn, I wish there was an exact date on this thing.  But I do remember writing it and how old I was.

Here's the transcribed version if the images were hard to read...

Rings on Her Fingers 2

Curious as to the original writing prompt?  Here it is...


One day, Florence Wyndham suddenly took ill and slipped into a coma. Despite all that the doctors tried to do for her, she eventually died. Her husband was heartbroken. She was buried in a small cemetery about a mile from her home.

In the middle of the night, a grave robber broke into the cemetery. He was carrying a lantern and a shovel. He began to dig her up. When his shovel eventually hit wood, he scrambled down into the grave and prised the coffin open.

Holding up the lantern, he looked at the corpse inside and saw two gold rings on the dead woman’s fingers. Taking hold of her cold, dead hand, he began trying to pull off the rings, but they were stuck fast.

He decided that the only way to get the gold rings was to cut off her fingers. Taking a knife out of his pocket, he sliced into the finger with the with the first gold ring and, to his horror, it began to bleed.

We were prompted to pick up the story from there.  Naturally, mine turned into a slasher story.  I changed the name of the female character from Florence to Daisy. Why? I have no idea.  Do you?