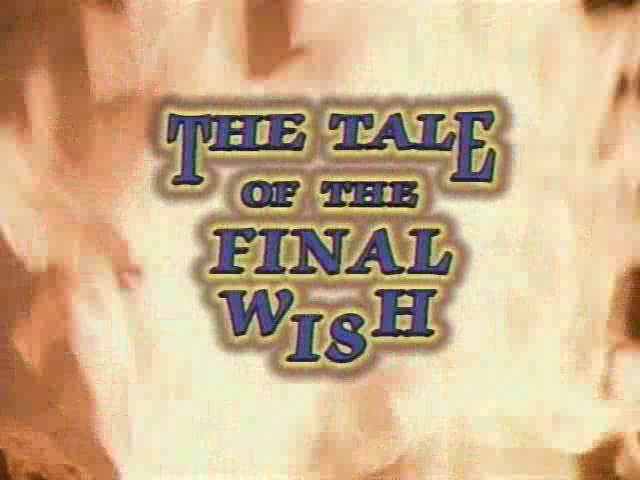 So here we are, the season two premiere of ARE YOU AFRAID OF THE DARK?.  The first season was a lot of fun, so let's see what this season has in store for us!

Like all the previous episodes, this one starts with the gang huddled around the campfire.  Kristen has with her a book of fairy tales.

The tale kicks off with a princess holding an apple, clearly it's supposed to be Snow White. 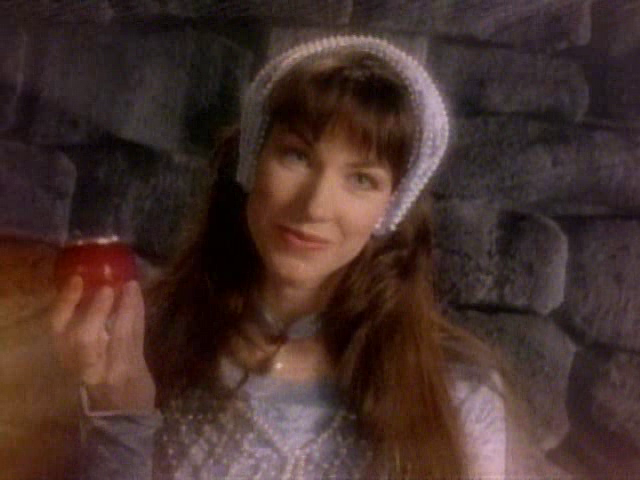 But then she spins and turns into... 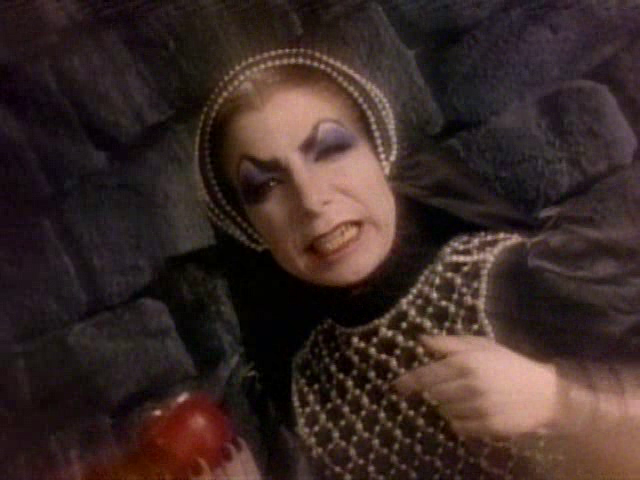 ...some sort of evil witch/evil stepmother hybrid.  But suddenly we cut to reality.  It was a just a dream.  A girl wakes up, holding a book of fairy tales.

The girl gets up and fetches a glass of water.  She returns to her room and sits on her bed, she thinks about looking under the bed for any "monsters," but she reassures herself that they do not exist, until... 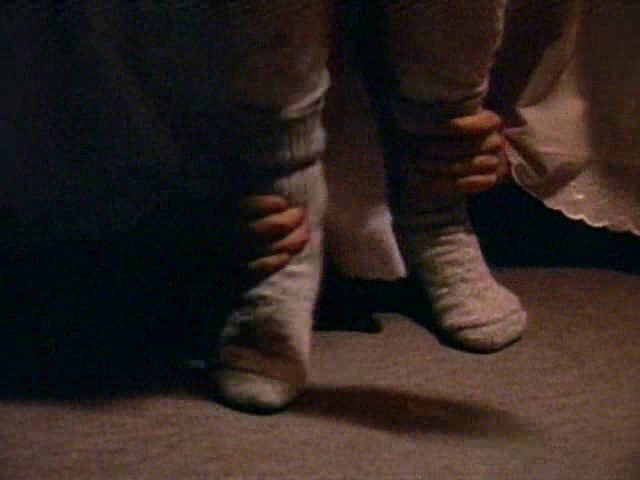 ...a pair of hands reach out and grab her!

Jill runs to her parents' room and wakes them up...and drags them into her room to check under her bed. 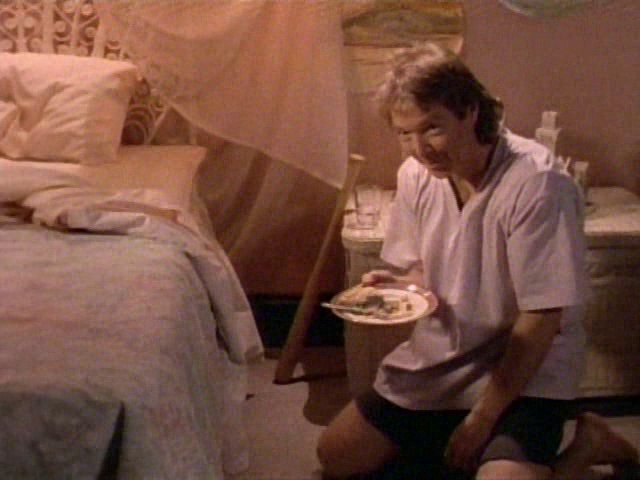 But all her dad finds is a plate of food from last week.  Ew. 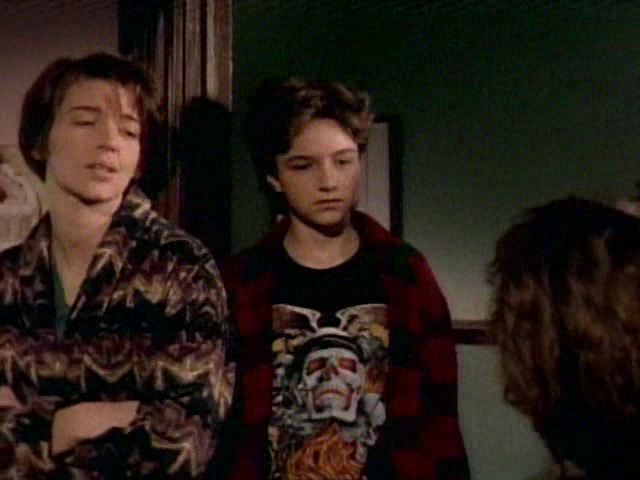 Jill's brother pokes fun at her and then admits to being the one under her bed after their parents leave the room.  Oh, you little shit. 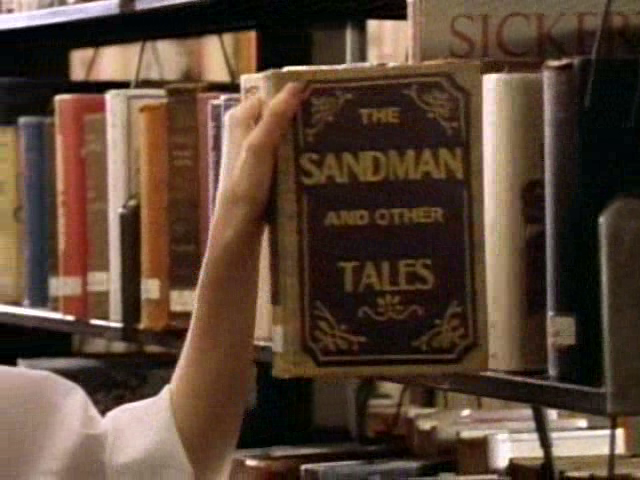 Despite her brother telling her to grow up, Jill still finds herself looking at fantasy books at the library, the next day at school. 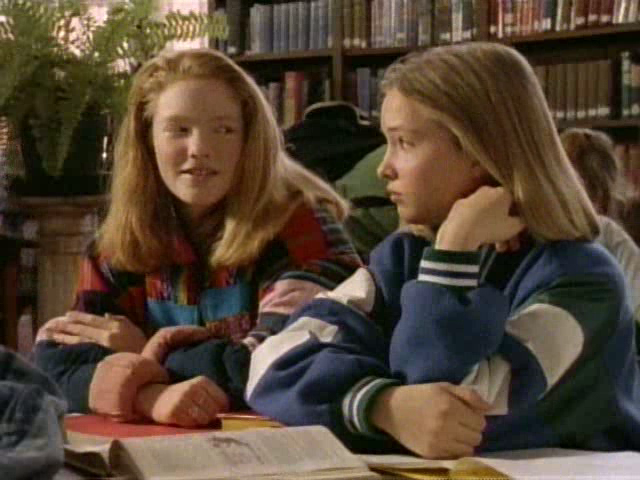 Jill catches two of her "friends" checking out the school's "cute boy."  The girls notice that the boy appeared to be checking Jill out and they're totally put off.  So, naturally, they plan to get her back once she returns. 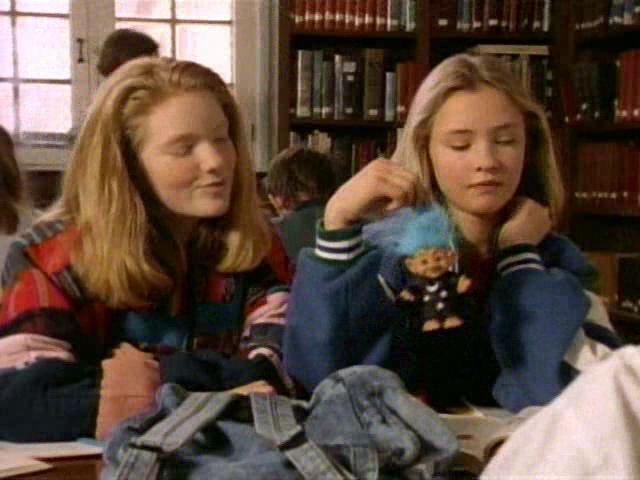 The boy comes to talk to Jill and the girls start pulling all of her childish items out of her backpack, including this awesome troll.

Later that night, Jill is dreaming that the cute boy from school is dressed as Prince Charming, next to her bed.  She awakes to... 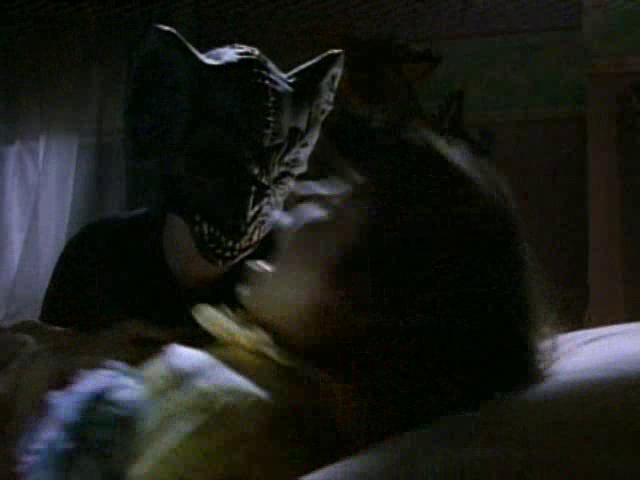 ...her brother wearing a hideous goblin mask.  I chuckled at this scene.  Jill freaks.  Her brother laughs and then tries to console his sister, but it's useless -- she kicks him out of her room.

Jill later sits by her window and wishes that everyone would leave her alone while looking into the night sky.

Jill later wakes up in the middle of the night to find her house empty.  She heads back to her room and sees some rustling under her bed.  Thinking it's her brother, she lifts the skirt to see... 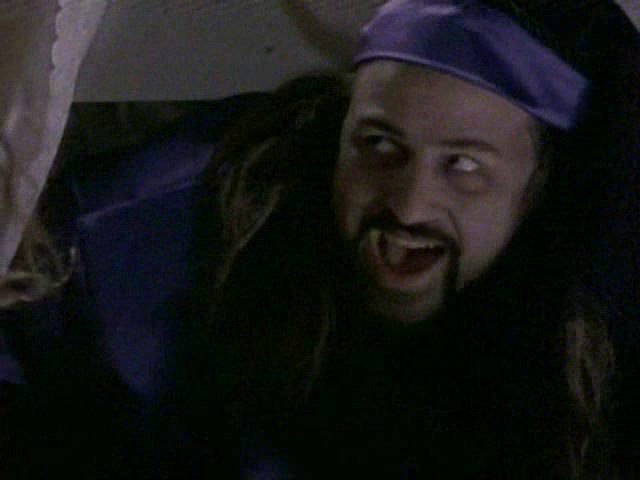 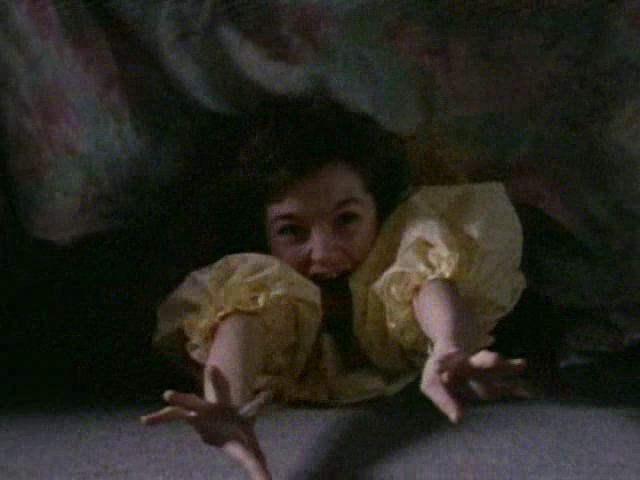 He sucks her under her bed. 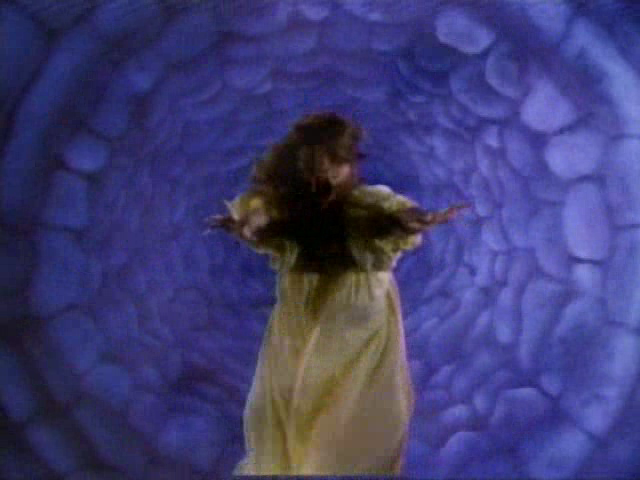 Which also leads to some sort of weird tunnel. 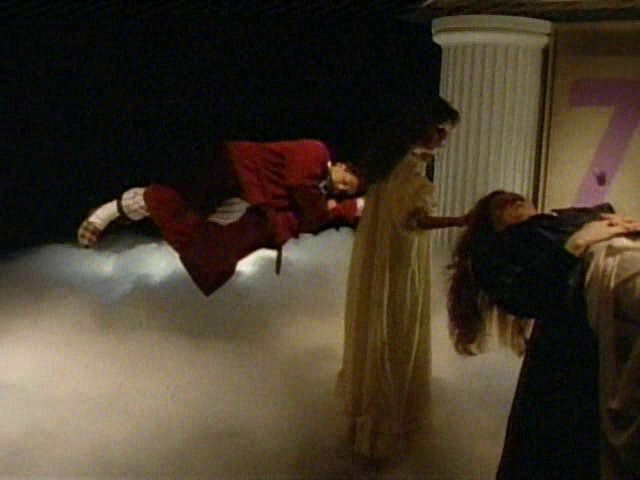 Which then lands Jill in some sort of area with sleeping people. 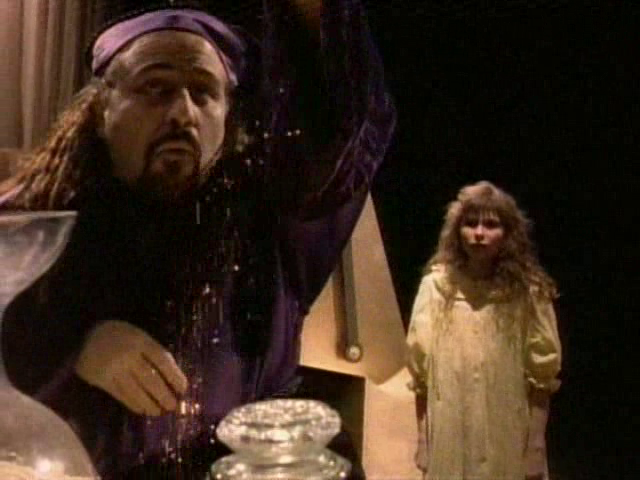 Jill discovers that she's in the Land of Nod (and yes, Bobcat plays The Sandman).

She demands to go home but The Sandman tells her that isn't possible.  She got what she wished for -- she's now living in a fairy tale.

Jill tries to run away but is lead to a series of doors, each one opening up to a different, sinister, fairy tale. 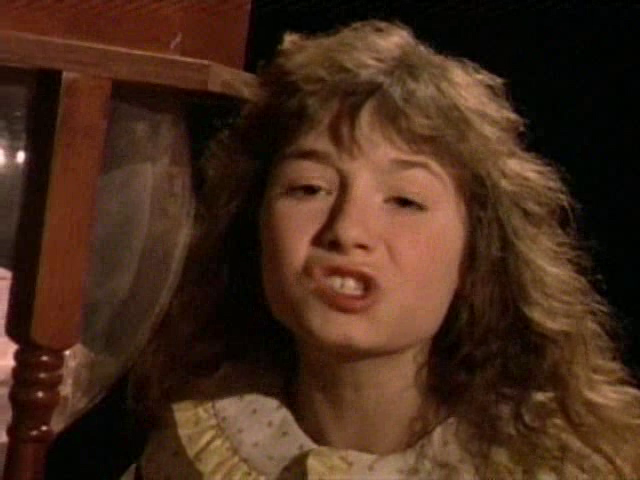 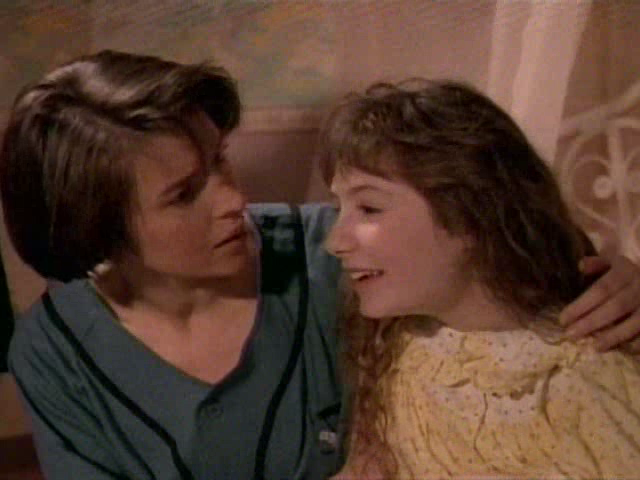 And she wakes up with her mom by her side.

Jill's family leaves her room again as she says she is ready to put all this fairy tale stuff behind her for good.

As Jill drifts back to sleep, the book on her vanity opens and flips to the last page. 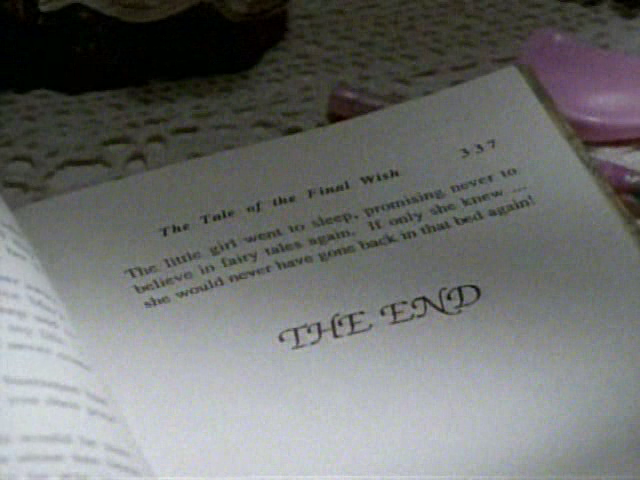 Next episode: S02E02 -- "The Tale of Locker 22"
Are You Afraid of the Dark? Midnight Society Nickelodeon Snick TV