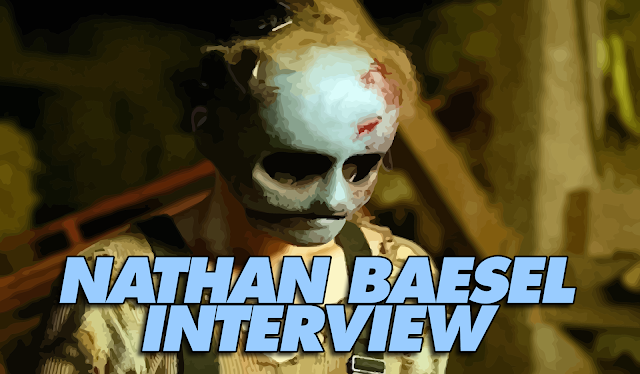 I'm sure everyone is familiar with the fucking incredible Behind the Mask: The Rise of Leslie Vernon.  If not, well, sucks to be you then.  Behind the Mask is a slasher mockumentary from 2006 that explores the "behind the scenes" if a slasher mentality and ask the question, "What if movie killers were regular folk?"

I had the opportunity to ask Nathan Baesel, who plays the titular character, a few questions regarding the movie and the proposed sequel, B4TM, that almost saw the light of day a few years ago.

...but perhaps something is brewing...

1. When you were making BTM, did anyone have any sense that it would go on and spawn a cult following?


I don't think anyone believed we could achieve the kind of longevity that cult status implies but I think EVERYONE believed if we executed the script capably we could pull off an impressive film. I was thrilled at each stage of Production and Post-Production to see that BTM was going to end up looking like we'd all imagined it. That is such a rare occurrence that I could have walked away from my entertainment career at that point perfectly content. The fact that it ended up having legs and life and that our passion inspired passion in others is huge gravy.

2. You played an extremely likable antagonist as Leslie Vernon, and in many ways, the character comes across as a protagonist until the climax. What was the process like switching gears like that?


Leslie without mask was more of the film than Leslie with mask and I'd been goofing around in "documentary" format for weeks and weeks before gearing up. The transition was so abrupt that it was essentially like making an entirely different film. It was far more technical to work in the "cinematic" format where camera set-ups, lighting, power considerations, staging considerations, etc. lead to a lot of downtime. And yet working with mask on was more intense than anything to that point because of the dark meditative state I was free to cultivate during all of that down time. My thoughts were far scarier than anything that ended up on screen.

3. Killing aside, what keeps Leslie occupied during the "off season?"


The beauty of Leslie is that he's a fun loving guy! Yes his chosen occupation is rough stuff but he LOVES what he does. And he loves his life. And he loves sharing all of the wonderful things he's learned along the way with people who get what he's about. And he loves changing the minds of people who aren't into what he's about. By pursuing his passions without reservation or apology he infects others with sheer joy. We all know people like that, don't we? People we love being around simply because of their joy in being alive?

4. A sequel to BTM has been rumored for years, even a crowd-funding campaign was started for B4TM: The Return of Leslie Vernon -- things didn't quite pan out -- so what can you tell us about the current status of B4TM? Still "in the works?" You can tell me. I won't tell Scott Glosserman, ha-ha.


The script is good. Really good. It plays on conventions of prequels/sequels as you'd expect but the vehicle of the story is really clever, even more so than BTM. B4TM is closer now than it's ever been. I hope to have more word on that soon so keep hanging in there. It'll be worth it.

5. Lastly, B4TM aside, what is Leslie Vernon up to in 2016? It's been 10 years. Certainly, he's honed his skills by now and found a way to implement modern technology in the hunt for a survivor girl.


Leslie's been keeping up with developments in the field but he prefers old-school and is convinced if folks get a taste of truly inspired work they'll come around to the substantial and leave behind the whiz-bang kind of work that sticks around as long as a puff of smoke. He's intent on breaking through the noise which only gets more distracting year by year and he's pretty sure he has a plan to do just that.

A huge thanks to Nathan Baesel for taking the time to answer a few questions for little ole me.  Hope you enjoyed it.

Thanks for reading and be sure to follow MorbidMuch on Facebook and me on Twitter!
B4TM Before the Mask Behind the Mask Interviews Nathan Baesel The Return of Leslie Vernon The Rise of Leslie Vernon