Frankenstein Moved In on the Fourth Floor! 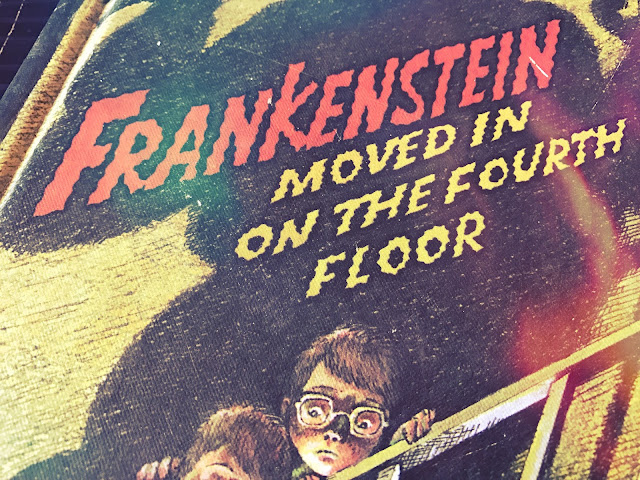 Published in 1979, "Frankenstein Moved in on the Fourth Floor" is easily my favorite children's book.  The exact details of how I came to know about this book's existence are a little unclear, but I what I do remember is it just somehow being at my house around the time that I was ten years old.

Regardless of my copy's origins, I'm so glad this book found me.  The cover alone won me over.


Who could that ominous shadowy figure be?  Could it actually be ole Frank?  Guess I'd have to read it to find out.


Now the book's only four chapters long, so it isn't an incredibly long read.  But hey, it's kid's book.  So that's okay!

There's no official synopsis anywhere on or in the book, nor is there one online anywhere (after checking Amazon and Wikipedia).  So I'll do my best...


Sam and Robert are two young brothers living with their mother in an old-school, inner-city, apartment building. The boys notice there's a new neighbor moving in, but the strangest thing appears to be that he's moving from the basement. Sam and Robert have only caught glimpses of the man in shadowed silhouette form -- and they learn his name is Frank. So, naturally, they're convinced he is Frankenstein! Soon the two will learn the spooky truth!

And now, for the best part of this almost-forty-year-old book: the illustrations!

Go ahead.  I'll give you a minute to snag a copy off eBay or Amazon real quick.

And I literally just learned that there's another Sam and Robert book..."Dracula is a Pain in the Neck!"  O-M-G...buying now!

Have you read either of these?  Own them?  What do you think?
Frankenstein Frankenstein Moved in on the Fourth Floor