WTF! is a slow-burn slasher that's tons of fun!

Full disclosure: I've never even heard of this movie before yesterday.  I just so happened to stumble across a review for it on another site.  I didn't read the whole review, just skimmed it, and it was enough to push me into the direction of watching it. 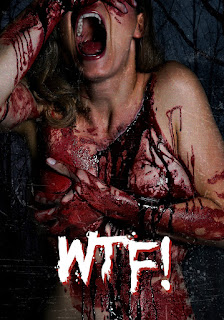 Surprisingly, it wasn't very hard to track down a digital copy, so that's exactly what I did.

The movies opens in the aftermath of a murder spree, there's police markers and evidence tags everywhere.  It's clear that something just went down.  We're given a little bit of backstory clarity when we're introduced the main character, Rachel.

Rachel is the sole survivor of the killings that pre-date this movie.  It's three years later and her and her college friends are planning a spring break getaway.  Naturally, they all choose to go to a remote cabin deep in the woods.  Sounds about right for a slasher flick.

Now, the movie's pretty transparent about who the killer is, even the filmmakers aren't trying to be.  I guessed the killer literally eighteen minutes into the movie.  But it's all good.  I still enjoyed the ride.

Also, not sure if it was intentional or not, but the movie is definitely a slow-burner.  The killings don't begin until the third act of the movie.  The only ominous foreshadowing is a scene where a character steps on a nail (that we're lead to believe was intentionally put there).

It's a pretty generic teen slasher flick, but if you were one of the people involved with the movie and you're reading this, then fear not!  That's the highest compliment I can give a movie.  I love teen slashers with every breath in my body.

Perez Hilton makes a small cameo near the beginning that feels very out of place...and the same with a few YouTubers that show their face for a brief moment.  It's all good, I guess.  It wasn't too distracting.

The payoff at the end of the movie is decent, even if I did see it coming.  But one of the coolest things about this movie is that it feels like a sequel.  It really does.  That's cool because this isn't a sequel.  Whatever they were trying for works.  I like it.

Aside from a few bad ADR moments in the beginning of the film, the film itself is pretty solid.  The editing is nice and tight and the cinematography is cool.

At the end of the day, I will surely recommend this movie.  Hell, I might even watch it again.
Reviews WTF!