LEATHERFACE is pointless, but not all bad. 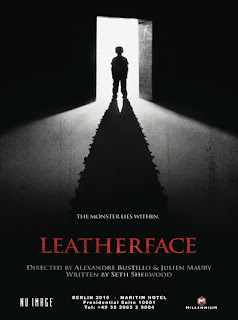 I sat down yesterday and watched Leatherface, the prequel to 1974's The Texas Chain Saw Massacre and 2013's Texas Chainsaw 3D.  I had heard a lot of mixed reactions for Leatherface on social media, mostly tipping the negative side of the scale.

Despite retconning the entire series and muddying up the timeline, I am a fan of Texas Chainsaw 3D -- so, yeah, I was a little bummed out when I found it this new one was a prequel to the '74 classic.

I had medium-to-high hopes, though, because the director duo previously made a fantastic and tension-heavy film with Inside.

And, well, here was my initial tweet regarding my first thoughts...


Yeah, the opening was that bad.  However, the film did manage to get a little better.

In what I can only argue is a completely pointless and unnecessary film and adds absolutely nothing to the mythology of the Sawyer family (aside from connecting the '74 film to the '13 sequel), the film itself takes a unique route in telling this origin story.

As I'm sure you've heard, the movie plays almost like a whodunit...almost.  We follow a band of mentally ill misfits after they escape from an asylum.  The story isn't bad, just...pointless like I've said.  Especially a -- SPOILER ALERT? -- a completely stupid necrophilia scene that does absolutely nothing for the story or characters moving forward.

In the end, it is what it is.  Definitely not good, but there are worse movies out there.
Leatherface Reviews