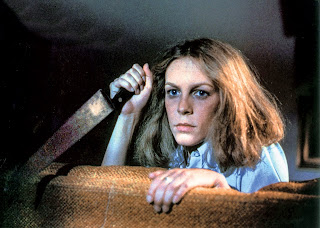 Surely by now, you've seen the bombshell that Blumhouse and Jamie Lee Curtis dropped yesterday.  It is confirmed that Jamie Lee Curtis will be reprising her iconic role as Laurie Strode in the upcoming Halloween movie scheduled for release in 2018.

What's funny, though, is that we've known since the beginning that this new film was going to be a direct sequel to the earliest installments.  So you can imagine the massive amounts of eye-rolling I did when I saw people complaining and saying that Jame Lee died in Halloween: Resurrection, how could she possibly return?  Well, it's simple, they're pulling a Halloween H20 and ignoring all previous installments.  So this is essentially Halloween H40.

But that's not my theory.  I think this is pretty much known.  However, here's what I actually think is going to go down...

I believe that this new movie will not be a sequel 1981's Halloween II, but rather a direct sequel to 1978's Halloween.

Here's why: in a realistic world, there's no way Michael Myers could survive the fire at the end of H2 (nor Loomis for that matter).  Myers simply disappeared after falling from the balcony in H1.  Flash forward forty years (to the day!), Laurie still resides in Haddonfield and she may even have a granddaughter that attends Haddonfield High.  She's most likely widowed and lives alone, or possibly lives with her family.

Now as for Myers, he'd be 61 years old by now.  He's probably in no shape to go on a killing spree.  However, and you heard it here first, don't be surprised if this movie has a copycat killer (in the same vein as The Town That Dreaded Sundown remake, which was fucking awesome, by the way).

Now, there's always the possibility that this movie won't be set in 2018, but maybe 2008, making Myers only 51 and still very much capable of murderous mayhem.  But really, who knows.

Also, either JLC dies, or this is a one-off movie.  She ain't coming back again.