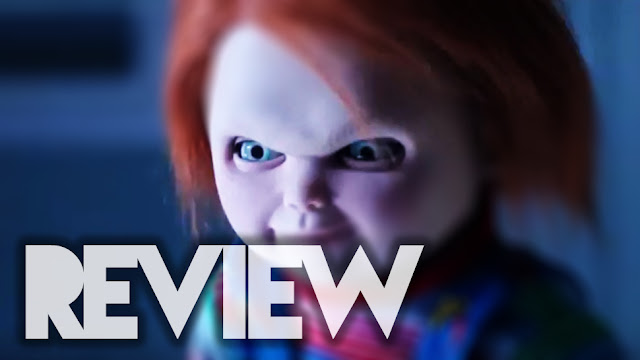 Well, today's the day...Cult of Chucky has hit DVD, Blu-ray and VOD.  And guess what?  I've seen it!  I've had Cult pre-ordered for almost three months now, and I was super stoked to finally receive it.  Now let's get past all this fluff and jump right into it...

The film opens up with Andy (Alex Vincent) on a date with a girl who is questioning his love of guns.  Of course, Any denies a "love" for them and insists they're only for protection.  He also correctly presumes that the girl has already Googled him and knows about his past. 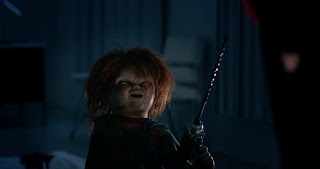 I loved Curse of Chucky and especially Andy's cameo at the end, so it's really nice to his character brought back and expanded on in this seventh installment.

Back at his place, we see that Andy still has Chucky's severed shotgun-blasted head, which he tortures periodically.  There's also a few cool throwbacks to the previous films hanging around Andy's place (like a framed Kent Military Academy sweatshirt from Child's Play 3).

Meanwhile, we see that Nica is accepting full responsibility for the murders in Curse.  Apparently, no one believed her story about a killer -- and rightfully so.  She's making progress and is moved to a minimum security mental institution by the recommendation of her doctor, who we find out is sort of a monster himself. 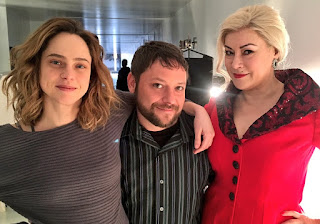 Also, if you're still confused by the multiple endings of Curse, then fear not.  Jennifer Tilly's character, Tiffany, is here to clear any and all confusion up.

The story, the best I can describe, is like A Nightmare on Elm Street 3: Dream Warriors meets Chucky.  The main cast revolves around a group of patients in the asylum...who all begin to share a bit of a group psychosis after a Good Guy doll is introduced to help Nica cope.

I don't want to get too far into spoiler territory, but I'll go ahead and spill these beans: Chucky and Tiffany have discovered a way to possess multiple bodies at once...which comes in handy when a second Good Guy doll is given to Nica towards the middle of the film.  It works mightily for this type of movie.

Cult manages to answer multiple questions that previous installments left hanging, while also leaving a few open-ended ones itself.

The story is solid and the characters are all great.  It's so awesome seeing Andy take on Chucky again.  It's been far too long.  I wouldn't mind Justin Whalin cameoing in the next one somehow (he played Andy in CP3).

Fiona Dourif (Nica) really shines this time around.  Not that she didn't in the last one, but you just sort of get a sense that she's really embracing this franchise now and is running with it -- which is nice to see.

Speaking of the next one, though...please, please, let there be a next one.  At this point, creator Don Mancini can do no wrong with this property.  He owns it...every damn second of celluloid and it's great.

If you're a fan of the franchise, then it's a no-brainer that I recommend this flick.  Even casual horror fans should dig it.  It's a little more comedic than Curse, but nowhere near Seed.  I'd compare it to CP3, for sure.

I know this review wasn't the best, but it is what it is.  I dig the hell out of the movie and can't wait to watch it again.