Surely you've heard about the new horror film Happy Death Day by now...it's only slaughtering the box office competition at the moment (looking at you, Blade Runner 2049).

Admittedly, I'm not the eager, trailer-seeking movie nerd that I was back in my teens, so my first exposure to any HDD related came when I saw the trailer play before 2017's It.  I knew right away that HDD was right up my alley.  It came across as Groundhog's Day meets, well, any '90s teen slasher.  I was excited, to say the least. 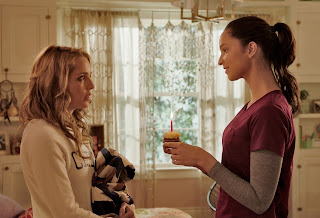 So fast forward to last Saturday (October 14).  I finally sat down to watch HDD.  And I was pleasantly surprised how seriously it doesn't take itself serious (if that makes sense).  With seemingly all modern horror movies taking a super dark, serious-in-tone route, it was nice seeing a horror movie, a slasher at that, just sit back and fun with its characters and audience.

Now I need to talk about the film's star, Jessica Rothe, for a moment.  Initially, she isn't very likable -- sort of a bitch who needs to die in a movie like this.  And that's what happens.  She isn't a nice person at all, but much like Groundhog's Day, through reliving the same day over and over again, with the end result always being death, her character is forced to take an honest look in the mirror...and she realizes that changes must be made. 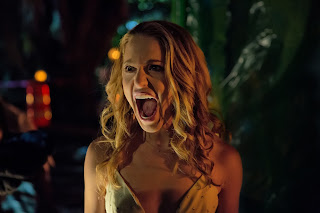 The plot is pretty straight-forward: in order to move forward, Tree (Rothe) must solve her murder before it happens.  And this is really where Rothe shines and makes her presence in the movie known.  She becomes America's sweetheart right before our very eyes.  She really begins having fun with the role, eliminating suspects only to be killed and then wake up alive.

We do, however, see that all these "deaths" are taking their toll on her body, leaving injuries and scar tissue under her skin.  This is where the plot gets interesting...when she, and we, realize that she doesn't have infinite lives and the clock is ticking. 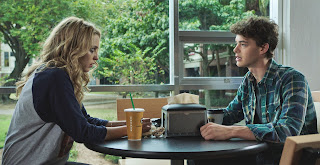 Most of the supporting cast isn't likable, but that's okay...because they're clearly written that way.  These are the people that Tree has surrounded herself with.

The killer, dressed in all black and wearing a baby mask (school mascot), is unnervingly menacing.  One of the better slasher villains in some time.

You may find some of the movie a bit predictable, like me, but it works for the story because there are plenty of third-act twists that will make you second guess yourself.

The movie is fun, hip and very refreshing as it seems that HDD could very well be a mainstream slasher revival (fingers crossed!).  The movie certainly isn't set up for a sequel, but I wouldn't say no to a HDD2.

What did you think of HDD?  I'd love to hear your thoughts!