Quick thoughts on THE STRANGERS: PREY AT NIGHT. 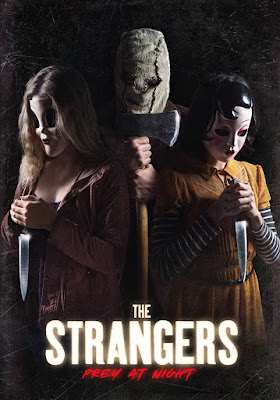 Finally got around to seeing The Strangers: Prey at Night this past Thursday.  And honestly, I'm surprised by how much I liked it.  The tone takes an almost complete 180 from the first movie -- and really, that's what it needed to do.

The first movie, in my opinion, is a classic in its own right.  Though it wasn't the first home invasion horror movie, it probably did the theme best.  It was an extremely slow-burning movie until the last ten minutes.  Then shit really started going down.

And the new movie gets right to it.  The movie opens with the strangers arriving at an elderly couple's mobile home in the middle of the night.  The scene is very non-violent but it does a great job at establishing the tone and feel for the rest of the movie.

We're later introduced to our main characters: a mom and dad and their two teenage kids.  The family is making a quick overnight stop at the mobile home park before taking the daughter to a boarding school.  We also find out that the elderly couple from the beginning of the film is the mom's aunt and uncle (presumably the park's owners).

The strangers make their initial contact with the family in the exact same manner as they did in the first movie.  The "Dollface" stranger knocks on the door asking if Tamra's home.  Things escalate rather quickly and the third act of the movie takes up a large portion of the film.  Which I really liked.

Now let me gush about a particular scene in the movie.  The pool scene.  If you haven't seen the film then I'm sure you've at least heard people talking about this scene.  It was fucking phenomenal.  It was full of tension, it was scary, it was expertly choreographed and it elevated the teenage siblings from possible victims to full-on fighters.  It was awesome and I can't wait for the Blu-ray now.

I will say, however, that I was little disappointed how minimal the "Pin-Up Girl" role was.  I feel like she played a pretty big role in the first movie and she's just sort of pushed aside in this sequel.  Spoiler: she literally only appears in like three scenes.  Briefly, too.  But you kind of get the sense that "Dollface" and "The Man in the Mask" are the leaders of the trio.  At least that's the vibe I got.