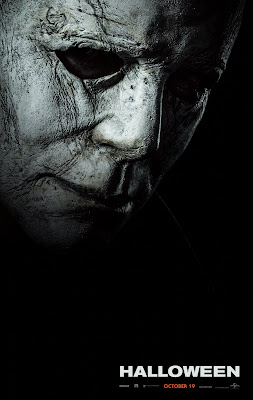 Okay, so the teaser poster for Halloween (2018) has been released. The movie comes out in exactly six months. And we've finally gotten our first look at the mask.

It's not horrible. Not really what I was expecting. I was expecting something maybe not as worn and weathered (although we have been told several times that this is supposed to be the same mask from the 1978 killing spree).

Obviously, I'll save full judgment until I see the mask in action in the movie...or maybe a trailer. But let's address the elephant in the room: it's very Rob Zombie-ish. And honestly, that's not necessarily a bad thing. It's been forty years -- of course, the mask is going to be aged.

The second thing I immediately noticed is that this version of the mask looks uncannily similar to "The Butcher" (a fan mask made by Night Owl Studios). That's always been a fan favorite as far as concept masks go.

The biggest nitpick I have with this poster -- in all honesty -- is the Halloween logo. Obviously, they wanted to change it up a bit to separate it from Carpenter's original...but this? Eh. Maybe it'll grow on me. The font used for the date looks good, though. 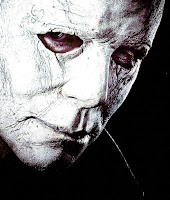 I dig the look of the mask, though. I do. Now can we fast-forward six months to October 19?

Quick side note: I brightened and enhanced the image in Lightroom and exposed a little more detail. You can clearly see that Myers still has some left eye damage. Just another nod to the 1978 original.
Halloween