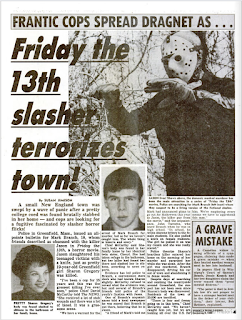 It is said that Mark murdered Sharon Gregory over a profile she had written about him.  The two were supposed "friends."  Apparently, Gregory had found him fascinating and knew there was something "off" about Branch.  This led to Branch wanting that written profile...by any means necessary.  It all sounds like something ripped from a horror movie, and in a weird sort of way, it is.

Branch's decision to attack Gregory dressed as Jason Voorhees led the town to speculate about what could possibly happen next.  Branch immediately disappeared after murdering Gregory.  Her body was found by her twin sister and Branch was an immediate prime suspect.

Police found Branch's car a few miles away, parked on the exterior of a large forest.  Gregory's blood was found all over the car's interior.  A manhunt ensued.  An abandoned slaughterhouse was found in the woods nearby where crude drawings on the walls indicated that Branch had been there very recently.  One image, in particular, showed a hockey-masked killer chasing a woman up a set of stairs with a knife (the same way Sharon Gregory was killed).

The town was in such a state of panic that even the local movie theater pulled Halloween 4: The Return of Michael Myers from its screens, a slasher sequel that had only been released a couple days earlier.  Authorities, grossly misguided, assumed Branch might show up to one of the screenings and enact his final act of mayhem.

It was all insane madness.  Turns out, about a month after the crime, Branch's lifeless body was found hanging in the woods, a mere 200 yards from the site of the abandoned slaughterhouse.  A coroner would rule that Branch had likely taken his own life the same day as the murder.

This whole case is immensely fascinating and very troublesome.  It most certainly sheds a negative light on the horror community and how obsessive fans can get.  But don't let the actions of Mark Branch on October 24, 1988, sway your opinion.  This is obviously the case of a very disturbed young man who simply acted out in anger and merely used the Jason modus operandi as a means to an end.

Check out this segment from the TV show Psychic Detectives which ran an episode on the Mark Branch/Sharon Gregory case.


Thanks for reading!  I hope you found some of, if not all, of this information useful.  I also want to give a huge shoutout to the blog These Mysterious Hills for having the only article with any real information on the case on the internet (that I found).
Friday the 13th Halloween 4: The Return of Michael Myers Jason Voorhees Mark Branch