HAPPY DEATH DAY 2 & what to expect. 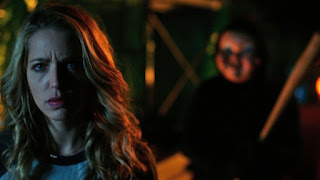 So it has finally been officially confirmed that Happy Death Day 2 is happening.  But not only is it happening but the stars from the first movie -- Jessica Rothe and Israel Broussard -- are returning for the sequel.  I'm happy about this because this movie's concept is something that easily lends itself to that dreaded straight-to-video realm (or in this case, straight to VOD).  So getting a "real" sequel is cool...and it starts filming on May 10...like, 7 days from now.

Now, I never made it a secret that I loved the first Happy Death Day (see my review here).  I thought it was a cool story with an interesting killer and an exceptional lead in Jessica Rothe.  So I am excited about this sequel.  I'm curious as to where the story will go.

Rothe hinted a few months back that a sequel could deal with time travel and, honestly, I'm totally up for that.  And on the Trick or Treat Studios Facebook page, they let slip in a comment that they've already sent 300 baby masks to the production of HDD2 (Trick or Treat Studios is putting out the officially licensed masks this Halloween).  So at least we know that the baby-masked killer will make some sort of appearance in the sequel (fuck yeah!).

I expect the film to be fun, like the first.  I assume that the character situations will be cranked up a notch as well.  After all, a sequel -- especially a horror/slasher sequel -- usually tries to one-up the original in almost every category.  They don't always succeed, but some do.  So let's hope that HDD2 is one of those lucky few.

I also expect the sequel to remain PG-13 like the first.  Honestly, making these movies rated R doesn't really change a whole hell of a lot.

How do you feel about this sequel?  I'd love to hear your thoughts.

One more thing...I just added a Guestbook to the site which is themed like an old AIM chat window.  Go sign it now!
Happy Death Day 2